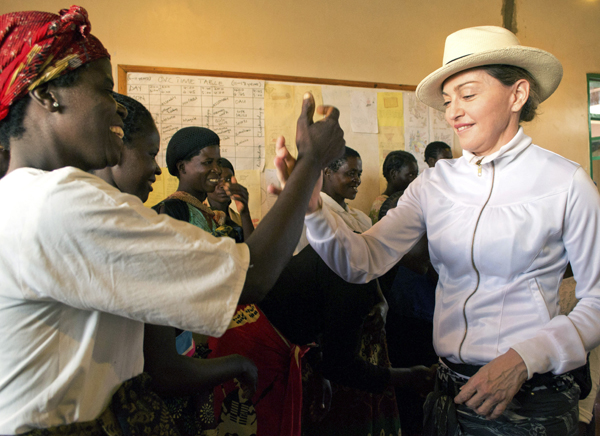 BLANTYRE, Malawi - Malawi issued a scathing critique of pop diva Madonna on Wednesday, accusing her of exaggerating her contributions to the southern African country and demanding special treatment during her tour there last week.

A spokesman for the pop star denied the accusations and suggested they were prompted by the recent removal of the president’s sister as head of Madonna’s humanitarian organization there.

The singer has a long history with the country, which she first visited in 2006. She adopted two children from Malawi and runs several projects there. She was granted VIP treatment during previous visits, including when she last jetted into the country on April 1. But Madonna apparently was surprised when she learned upon leaving Malawi that she and her traveling party would have to line up with ordinary passengers and be frisked by airport security.

“Granted, Madonna is a famed international musician. But that does not impose an injunction of obligation on any government under whose territory Madonna finds herself, including Malawi, to give her state treatment. Such treatment, even if she deserved it, is discretionary not obligatory,” the statement said.

The presidential statement also questioned Madonna’s intentions behind her humanitarian efforts in Malawi, alleging that the singer “wants Malawi to be forever chained to the obligation of gratitude.”

“Kindness, as far as its ordinary meaning is concerned, is free and anonymous. If it can’t be free and silent, it is not kindness; it is something else. Blackmail is the closest it becomes,” the statement said.

President Joyce Banda was reportedly angered by Madonna’s claims that she has built 10 schools in Malawi, and questioned that statement in widely quoted remarks last week.

“Where are the 10 schools she has built? She is just building school blocks at already existing schools. In some cases she just renovated an already existing block. This is an insult to the people of Malawi. She can’t be lying to the world at our expense,” Banda said.

A spokesman for Madonna expressed surprise at the most recent criticism.

“Obviously these attacks are influenced by the fact that the president’s sister was removed as the head of Madonna’s organization in Malawi due to concerns about mismanagement of $3.8 million,” said Trevor Neilson, whose Global Philanthropy Group is managing Madonna’s projects in Malawi. AP