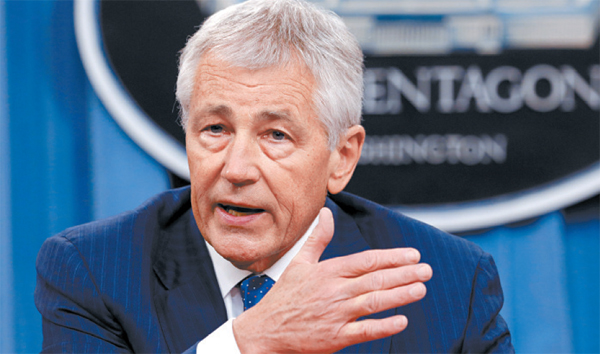 U.S. Defense Secretary Chuck Hagel speaks during a briefing on the defense budget Wednesday in Washington. Hagel said the Pentagon was hit hard by budget cuts, but its ability to counter a North Korean attack remains unaffected.[REUTERS/NEWSIS]

As more in South Korea call for American tactical nuclear weapons to counter the North’s nuclear brinkmanship, it was confirmed that the U.S. Congress has asked Washington to submit a report on the feasibility and strategic value of reintroducing the smaller-scale atomic bombs to South Korea.

According to the National Defense Authorization Act for Fiscal Year 2013, the U.S. Congress required the secretary of defense, in consultation with the secretary of state, to submit a report on the “feasibility and strategic value of deploying additional conventional and nuclear forces to the Western Pacific region to ensure the presence of a robust conventional and nuclear capability, including a forward-deployed nuclear capability, of the United States in response to the ballistic missile and nuclear weapons development of North Korea and the other belligerent actions North Korea has made against allies of the United States.”

In section 1046 of the act, Congress said the report should be made no later than 180 days after the date of the enactment. “The report shall include an evaluation of any bilateral agreements, basing arrangements, and costs that would be involved with such additional deployments,” it said.

President Barack Obama signed the bill, HR 4310, into law on Jan. 3. The report is due to come in June.

While the act did not use the term “tactical nuclear weapons,” it made it clear that an option of a “forward-deployed nuclear capability” should be studied to counter the North’s security threats.

After North Korea conducted a third nuclear test, test-fired a long-range missile and made a series of threats to use its arsenals against South Korea and the United States, demands increasingly grew in the South that it should arm itself with nuclear arsenal by pursuing its own program or bringing back U.S. weapons.

The U.S. military withdrew its nuclear arsenal from the South in 1991. The two Koreas adopted a bilateral denuclearization agreement on Jan. 20, 1992, but the pact was effectively nullified by North Korea’s nuclear arms program.

“It is impossible for us to face a nuclear-armed North Korea with conventional weapons,” he said. “The U.S. tactical nuclear weapons must be redeployed to the Korean Peninsula. We are in a desperate need of a nuclear umbrella.”

He also said the plan for the U.S. to hand over wartime operational control to the South in 2015 must be delayed. “The arrangement was under the condition that the North doesn’t have nuclear arms,” he said. “Now that there is a fundamental change, we must maintain the Korea-U.S. Combined Forces Command system which guarantees the automatic U.S. involvement in the event of the North’s provocation.”

“If the North’s nuclear threats will prompt the U.S. troops in the South to rearm with atomic weapons, a nuclear domino will begin in Northeast Asia,” said Park Yong-jin, spokesman of the DUP.

“It is not the time to create a dangerous and destructive confrontational structure.”

Park said the U.S. Congress’ move is extremely dangerous, and the Korean politicians must not go along with it recklessly.

Meanwhile, U.S. Defense Secretary Chuck Hagel said Wednesday in Washington that the Pentagon was hit hard by budget cuts, but its ability to counter a North Korean attack remains unaffected.

“We have every capability to deal with any action North Korea would take, to protect this country, and the interests of this country, and our allies,” Hagel said at a briefing on the Pentagon’s 2014 proposed budget.

While spending was cut, Hagel made it clear that the U.S. commitment to Asia remains unchanged.

“This budget also increases the Defense Department’s investments in its cyber workforce, continues to implement our rebalance to Asia and makes new investments in the flexible platforms needed for the future,” he said.

In the specific budget report, North Korea was named along with Iran and other international terrorist organizations as main adversaries.