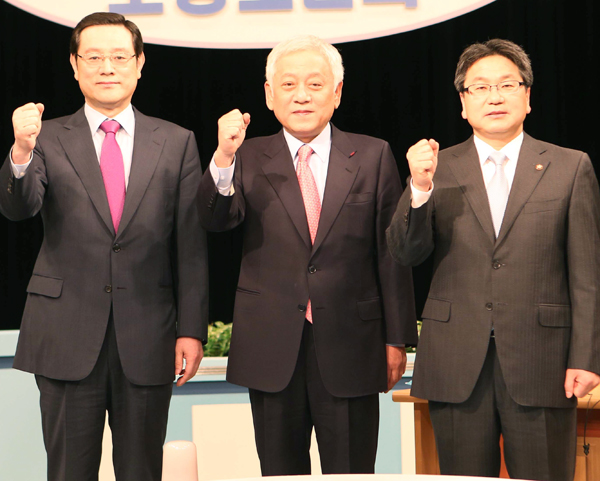 Three candidates running for chairman of the Democratic United Party - from left, Lee Yong-sup, Kim Han-gill and Kang Gi-jung - pose for photos yesterday before a televised debate hosted by the Busan branch of MBC. By Song Bong-geun

The race has begun to select the new leader of the largest opposition party, and the outcome of the preliminary round of the election indicated the possible fall of the mainstream faction blamed for the December presidential election defeat.

Ahead of the party convention on May 4 to elect its new chairman and four members to its Supreme Council, the Democratic United Party held Friday the first round of elections to eliminate some candidates.

Kang Gi-jung, Kim Han-gill, Shin Geh-ryoon and Lee Yong-sup made their bids to become the new chairman, while 11 others ran to become a Supreme Council member.

Shin was eliminated in Friday’s cutoff, where the party’s central committee members cast ballots to decide who should run for chairman.

Seven of the 11 were also picked to advance to the Supreme Council race.

Shin’s elimination came as a surprise as he was one of the strongest contenders in the race, according to opinion polls conducted earlier this month.

Kim, a four-term lawmaker and leader of the so-called “nonmainstream” faction, was seen as the frontrunner. Kim’s rivals were from the mainstream group led by Roh Moo-hyun loyalists, and Shin was a close associate of the late former president.

Local media and political observers have said Kim emerged strong, as the chairmanship election is taking place following the bitter defeat of Moon Jae-in, who ran for president in December.

Moon and other Roh loyalists, including the former DUP Chairman Lee Hae-chan, were largely criticized for the defeat.

It is Kim’s second run at chairmanship of the DUP. In last year’s leadership election, he lost to Lee, former prime minister of the Roh government.

A recent report by the presidential election review committee also publicly held the Roh factionalists responsible for the defeat, but they challenged the evaluation and questioned the political motive behind the timing of the announcement.

Shin, another four-term lawmaker and former chief of staff for Roh when he was president-elect, said Monday he believes he will face Kim in a one-on-one match by consolidating campaigns with Lee and Kang.

His strategy, however, did not succeed as he was eliminated in the first round.

The campaigns leading to the May 4 convention started Saturday as the candidates were finalized.

The candidates for the chairmanship election and the Supreme Council election will tour the country until April 27 to participate in joint stumping events at 17 major cities.

While the DUP’s leadership race has attracted little media attention in the past weeks due to the April 24 legislative by-elections and the North Korea crisis, it is seen as an important political event that will define the largest opposition party’s identity and future direction.

Over the past few months, the party has struggled to pull itself together after its bitter presidential defeat.

Days after the presidential defeat, the DUP elected Representative Park Ki-choon as its new floor leader to get the party back on its feet.

In January, the party appointed Moon Hee-sang, a high-profile, moderate liberal, as its interim leader for further reform.

The party has modified its leadership election system to ensure fairness. Fifty percent of the vote will come from delegates, while 30 percent will come from the party members who pay for membership.

The remaining 20 percent will come from nonpaid members and public opinion polls.

A group of 12 incumbent and former lawmakers also issued a statement on Thursday, on the eve of the elimination round, and urged the party members to make their best efforts to end the factionalism fights.

Among the three final candidates, Kang and Lee might also form an electoral alliance against Kim.

Before his elimination, Shin tried to consolidate the candidacies with Kang and Lee to face Kim in a one-on-one match.

It, however, remains to be seen if Kang and Lee will continue to pursue the strategy.

After Friday’s cutoff, Lee said he will talk to Kang about the electoral alliance, while Kang said he’ll take some time to think about it.

Among the seven out of 11 candidates who passed the elimination round for the Supreme Council race, Yun Ho-jung was the only Roh loyalist to make the cut.

In the elimination round, 318 central committee members of the DUP, including its lawmakers, local government heads and internal committee heads cast ballots.

Moon, the defeated presidential candidate, and Lee Hae-chan, former chairman of the party, did not participate, although they are still lawmakers. The DUP did not announce the specific votes each candidate won.