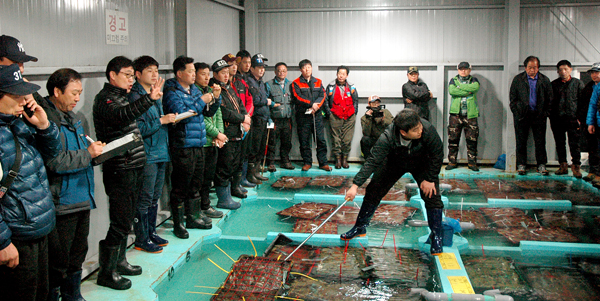 Wholesale merchants look over the small amount of blue crabs that were shipped Friday at Soraepogu fish market in Incheon. Compared to a year ago, blue crab catch in the northwestern sea, including Yeonpyeong Island, has fallen significantly due in large part to tensions between the two Koreas. By Kim Young-min

Early in the morning on Friday, the docks of Soraepogu in Incheon resembled a ghost town. The fishing neighborhood that used to be crowded with boats loaded with blue crabs was silent.

Only three or so crab boats were visible. It was clear this year’s catch wasn’t going to be easy. Bidding was over in just seven minutes, instead of the 20 it normally takes for the catch to be sold. About this time last year, roughly 12 tons of crabs were traded daily. On this day there were four tons.

“This year’s crab fishing is ruined because of the North Korean threat,” said Chung Hae-young, a wholesale merchant.

Tension between the two Koreas since the beginning of the year is starting to affect several industries, including fishing in the northwest area near the border, tourism and the retail industry. Furthermore, major forums are being canceled as concerns outside the country rise. 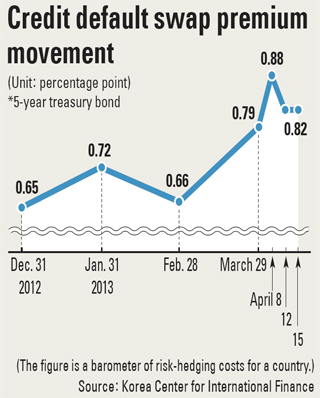 Usually, crab season starts in April and ends about June. But because of the threats from Pyongyang that started in March, many fishing boats stayed home. Last year, heightened tensions between the two Koreas over the maritime boarder, or Northern Limit Line (NLL), occurred from late May to early June and therefore had little effect on the crab business.

Even worse, ever since a 28-year-old North Korean defector went north across the border with a ship that he commandeered from Yeonpyeong Island earlier this month, the region has been locked down.

“Because water temperatures are low [compared to the past], the actual days that we could fish for crabs this month shrank significantly to three to four,” wholesale merchant Chung said.

With crabs that can be fished dwindling, boats from Yeonpyeong Island sail to the Incheon fish market only twice a week.

The situation is also affecting retailers, as crab prices rise.

“I have traded crabs for 10 years, but a one-kilogram (2.2-pound) crab was traded at more than 40,000 won ($35.77) on the auction block,” said Lee Yong-ho from Lotte Mart. “When the retail price is exceptionally high, consumers are reluctant to purchase them. Our biggest concern is how to get good quality products at a cheap price.”

Falling crab sales aren’t the only concern for Lotte Mart.

Lotte Mart’s private label women’s stocking supply has fallen to half of what it should be because the production line at its plant in Kaesong, North Korea, has been shut down.

The retailer is shifting Kaesong production to other factories in Vietnam and Indonesia.

But because the products has to be shipped by air, costs are up 5 percent.

The tourism industry and airlines are also hit hard. Korean Air’s international flight reservations this month are down 6 percentage points from last year to 72 percent of capacity.

The Chinese government is reported to have sent notices last week to Chinese tourism agencies via local governments to use caution on trips to South Korea.

The hotel industry is feeling the pain as well, with room reservations falling by 10 to 30 percent.

“Until Monday last week, sales to Chinese tourists were up 150 percent year-on-year,” said an official at the duty-free company. “We expect a significant dent in our business as the number of Chinese tourists is likely to shrink.”

Experts say that if the situation continues, it could also affect investments from overseas.

According to the Korea Trade-Investment Promotion Agency (Kotra), only nine out of 14 foreign investors from 12 countries said the tension is not affecting their investment.

Kotra said this is a mild but noticeable change compared to last month. The state-run agency said that when it conducted the same survey last month, almost all said the geopolitical tension had little influence on their investments.

“The North Korea risk has rarely lasted this long in the last 10 years or so,” said Kim Chang-bae at Korea Economic Research Institute.

“Instead of overreacting, we need to calmly approach the situation and find ways to recover the domestic market as well as economic sentiment.”

The stock market, on the contrary, seems to be recovering its pace. Korea Exchange, the nation’s securities operator, on Sunday estimated the benchmark Kospi index had fallen more than 5 percent as of Friday compared to the beginning of the year.

During the same period, the Dow Jones Industrial average rose nearly 11 percent. A week earlier the market closed at a low for the year of 1,918.69. Foreigners led the fall as they dumped 4 trillion won worth of stocks from March to April 11. The weakening Japanese yen was one reason, but North Korea was another factor that contributed to the fall. But in the last couple of trading sessions, the market has stabilized somewhat. Yesterday, the Kospi barely fell as it inched down 0.2 percent from Friday’s close.

“As if the slow passing of the tension was reflected in the market, the Korean won [that has been weakening] is starting to strengthen,” said an analyst at Mirae Asset Securities.

“Although we need to continue to monitor the financial market’s response, including the won-dollar exchange, it is likely to weaken.”