No parade or speech on Kim Il Sung’s birthday

No parade or speech on Kim Il Sung’s birthday 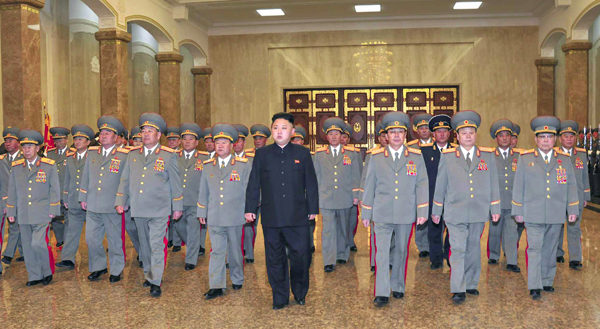 Accompanied by military leaders, North Korean leader Kim Jong-un, center, pays his respects to his grandfather Kim Il Sung by visiting the Kumsusan Palace of the Sun in Pyongyang, where the body of the founder lies in state, on the late Kim’s 101st birthday yesterday. [Rodong Sinmun]

North Korean leader Kim Jong-un paid his respects to his grandfather, making a public appearance for the first time in two weeks since attending the Supreme People’s Assembly on April 1.

The ruling Workers’ Party’s mouthpiece Rodong Sinmun posted a photo of Kim visiting the Kumsusan Palace of the Sun in Pyongyang yesterday, where the body of the founder lies in state.

In the photo, except for leader Kim most of the officials accompanying him were in military uniform, and there were few party officials present.

To mark the anniversary, the official Korean Central Television reported on Sunday that they unveiled statues of the late leaders Kim Il Sung and his son Kim Jong-il, erected in front of the building of the Ministry of People’s Security, a national police agency.

A string of events and performances took place, including a marathon competition and an art festival.

Analysts in the South say at the time he mimicked gestures and the speaking style of his grandfather.

North Korea tipped off select foreign diplomats in Pyongyang on April 5 about plans to launch midrange missiles toward the East Sea as early as April 10. Sources say the missiles could reach the western Pacific U.S. territory, including Guam.

Sources in Seoul said there has been no activity since Thursday near a mobile missile launcher, which was detected by the South Korean military.

“We see a missile launch appears to be prepared, and we are monitoring it,” Kim said at a meeting with lawmakers yesterday.

Still, Kim said, “There appears to be no signal of an all-out war” in the North, although Pyongyang has issued almost daily threats over the recent weeks.

However, the minister said there “is the possibility of a surgical provocation” from Pyongyang at any time.

Kim Min-seok, spokesman for the ministry, said that the tense situation on the Korean Peninsula could be prolonged.

“[The government and the military] have repeated the allegation that North Korea could launch a missile after April 10,” Kim said at a daily briefing yesterday.

“But it has been five days since then. North Korea could prolong [the tense situation] for a long time.”

Last week, Pyongyang’s state media urged all foreigners in the South to evacuate by April 10, raising speculation that the regime would stage a military provocation on the mentioned date.

The North has even said a missile launch is “ready.” Defense Ministry spokesman Kim said North Korea has never launched a missile on the birthday of its founder so far.

Still, he said, “If North Korea injected fuel into a missile, they could launch it whenever they want, with a political decision [to push the button].”