Massive budget to beef up market

Massive budget to beef up market 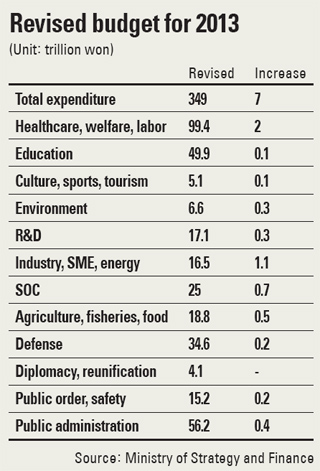 However, whether the extra budget can have positive effects on the market or not remains to be seen, since the majority of the budget (12 trillion won) will go to fill the gap in the government’s tax revenue.

The total amount includes 2 trillion won that the government can use without approval from the National Assembly.

The amount is so large that the announcement of the budget also sparks worries about deterioration of the country’s fiscal soundness, as it would require issuing 15.9 trillion won worth of Treasury bonds.

The Ministry of Strategy and Finance said yesterday the three main goals of the budget are to improve quality of life, support small- and medium-sized businesses and boost regional economies.

“We hope the latest supplementary budget works like priming water into a pump,” said Hyun Oh-seok, deputy prime minister for economy and finance minister, at a press conference.

“This size of a budget would let our fiscal policy play an active role in securing growth momentum for our economy.”

Due to worsening economic conditions at home, the government is seeing a sizable shortfall in its tax revenue.

Apart from the 12 trillion won being used to plug the hole in tax revenue, the remaining 5.3 trillion won will be used to help boost the domestic market.

The government highlighted that it plans to direct 3 trillion won toward creating more jobs and improving the general quality of life.

The money will be used to add 4,000 new jobs in the public sector, 19,000 jobs as social service providers and 28,000 customized jobs for the elderly, handicapped and low-income earners.

The government will also increase its financial support for local start-ups and an international job seeking program, named K-Move, in order to lay a foundation for natural job growth.

The Finance Ministry estimated that the supplementary budget would create about 40,000 new jobs. As a result, the government’s annual goal for job creation would increase from 250,000 to 290,000.

About 1.4 trillion won will go into the real estate market for implementation of the April 1 plan.

With the April 1 plan, the government pledged to expand support for loans for first-time home owners and provide 8,000 more public housing units for rent. First-time home buyers will also be exempted from acquisition tax.

Another 1.3 trillion won will be used for small exporters in order to help them make facility investments and afford proper R&D equipment.

The government will increase its donations in the Export-Import Bank of Korea and Korea Trade Insurance Corporation in a bid to expand supporting funds and insurance benefits for exports.

The remaining 3 trillion won will be spent to boost regional economies across the nation, including expanding investments in social overhead capital like roads, railways, dams and ports.

To enhance infrastructure for tourism and Hallyu (the Korean Wave), the government will also provide 43 billion won.

Given that local governments are expected to suffer falling tax revenues due to the acquisition tax cut until June, the central government will provide 1 trillion won for them.

The government is aware of possible deteriorations in its fiscal soundness and growth of national debt by increasing spending.

The Finance Ministry estimated the financial balance compared to GDP could fall 1.5 percentage points, while the proportion of national debt to GDP could rise 1.9 percentage points. Because of the new budget, the total amount of Treasury bonds to be issued this year is expected to reach 95.6 trillion won.

“However, our government is quite healthy in terms of finance, unlike the U.S. that mostly relies on its monetary policy,” said Lee Suk-joon, vice finance minister.

“Deflation is a bigger issue than inflation at the moment, because it affects market confidence,” Lee said. “Deflation hinders price increases, which leads to slow income and job growth.”

The Korean economy has grown less than 1 percent a quarter for the past seven quarters. Fourth-quarter GDP growth last year was 0.3 percent.

In late March, the Finance Ministry cut its projection for annual growth to 2.3 percent from the previous 3 percent.

Last week, Bank of Korea Governor Kim Choong-soo said inflation is a serious problem, as the central bank decided to freeze the benchmark interest rate at 2.75 percent for the sixth consecutive month.

Experts and market observers displayed disappointment at the announcement of the budget.

“The size of the supplementary budget can be considered appropriate to meet the government’s goal at least, but it falls short of market expectations that waited for solutions amid the continuing slowdown,” said Yim Hee-jung, a senior researcher at Hyundai Research Institute.

“Since the 12 trillion won is for filling the gap in tax revenue, the budget wouldn’t have much effect on boosting the market,” said Kim Chang-bae, a researcher at Korea Economic Research Institute.

On Monday, President Park Geun-hye also expressed worries that no matter what the government does to make a supplementary budget, there is a limit to economic recovery if companies don’t make investments.

The president raised concerns that private companies are unwilling to make investments due to legislation being prepared by lawmakers to put pressure on conglomerates under the political slogan of “economic democratization.”

“The actual amount to be released into the market is only about 7 trillion won, smaller than what the market expected,” said Oh Seung-hoon, an analyst at Daishin Securities. “Since there are possibilities that the budget couldn’t pass the National Assembly soon, market expectations would fade away.”

After the government unveiled the budget at 10 a.m., the benchmark Kospi broke the 1,900 mark for the first time in five months.

The supplementary budget is scheduled to be sent to the National Assembly on April 18.

The Finance Ministry hopes the original bill will pass the main floor by early May, but some lawmakers argue the budget is too small to beef up the economy, demanding 10 trillion won in spending at least.