Sailing down the waste waterway

Sailing down the waste waterway 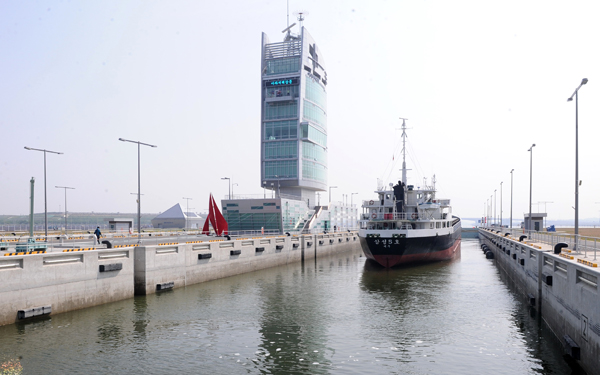 A ship navigates the Gyeongin Ara Waterway. The Seoul Metropolitan Government said it will use the waterway to transport trash. [JoongAng Ilbo]

The nearly 2.2 trillion won ($1.97 billion) Gyeongin Ara Waterway that was built to attract more domestic and international tourists by running a luxury cruise ship will likely be a “waste waterway,” transporting Seoul’s trash to a landfill in Incheon.

The Seoul Metropolitan Government said yesterday they are considering transporting the city’s trash on the 18-kilometer (11.2-mile) long canal, which connects the Han River with the Yellow Sea, to the landfill in Seo District, Incheon, which manages waste from Seoul, Gyeonggi and Incheon.

The Seoul city government has been wrestling with its Incheon counterpart to extend its contract to use the landfill, as Incheon citizens near the landfill strongly complain about bad odors when trash coming from Seoul is transported by land.

The city government judges that the waterway could solve Incheon citizens’ problem.

The idea came from public administration science Prof. Kim Jung-hoon from Seokyeong University, when he held a seminar at the National Assembly earlier this month concerning Seoul’s waste management.

The waterway project was developed in 2009 by the Lee Myung-bak administration to prevent the repeating flood of Gulpocheon Stream, which runs through Incheon’s Gyeyang District and Bupyeong, Bucheon and Gimpo in Gyeonggi, to reduce logistic costs, traffic jams and green development and to make it a new tourism landmark. The waterway was completed in 2011 after spending a total of 2.24 trillion won.

Only about 16,000 TEU (twenty-foot equivalent units) were transported via the multipurpose waterway last year. It is only 5.4 percent of the total quantity of goods transported that the Korea Development Institute estimated - 294,000 TEU.

“If we don’t solve the landfill issue, residents in Seoul will have some dirty problems they don’t want to face,” said Lim Ok-ki, director of the Climate and Environment Division of the Seoul city government. “Incheon wants to talk about this after a regional election is finished next year, but we can’t wait that long.”

According to the city government, an average of 16,500 tons of trash is transported from Seoul to the Incheon landfill every day.

“The waterway was created after spending trillions of won but was not effectively utilized because only two small cruise ships, in tourism for instance, sail a total of four times a day,” Lim continued.

The Seoul city government said they will suggest the plan to K-Water and Incheon soon.

“We haven’t received any suggestions yet, but [we] see it as one fine solution to utilize the waterway more,” Ahn Je-shik, head of the Business Development Division of the K-Water said. “But Seoul must make an agreement with Incheon first.”

However, the Incheon city government announced on April 5 that they will completely close the landfill that has managed waste for since 1989 and open a new place. They are considering three places as a replacement for the current landfill, but they haven’t disclosed the locations yet.

“We clearly stated that we will shut down the landfill after 2016,” Heo Jong-shik, the spokesman of the Incheon city government said. “The officials in Seoul must not know how much Incheon citizens do not like the facility.”