Fancy a stroll in an English garden? Go to Suncheon

Fancy a stroll in an English garden? Go to Suncheon 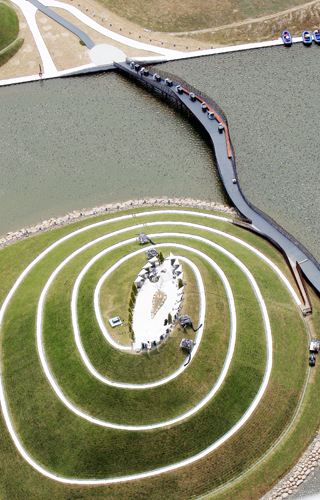 An aerial view of the lake garden at the International Garden Exposition Suncheon Bay Korea 2013 that kicks off tomorrow in Suncheon, South Jeolla. The event is Korea’s first garden expo recognized by the International Association of Horticultural Producers.[NEWSIS]

“Gardening is the purest of human pleasures,” English philosopher Francis Bacon (1561-1626) was once quoted as saying.

Although the weather has been particularly capricious this spring, spring is in full bloom and so are flowers, plants and trees. And spending time at a beautifully-tended garden will certainly get you in the spring mood. Many respected thinkers, such as Bacon, Hermann Hesse and Marcus Tullius Cicero also hailed the contemplative, calming effect gardens have on mankind.

Now, garden lovers have a chance to check out 82 gardens from 23 countries at the International Garden Exposition Suncheon Bay Korea 2013, which kicks off its six-month run tomorrow at the scenic city of Suncheon in South Jeolla.

The city is well-known as the site of the world’s fifth-largest wetlands and a treasure trove in terms of ecology, home to some 220 birds and 120 plants. Add to that the picturesque reed field and sunsets, and one can understand why it’s a photographer’s dream.

The garden expo is Korea’s first, and thus expectations were high from early on. “The reason we wanted to host a garden expo was because we wanted to preserve the environment of Suncheon Bay,” Suncheon Mayor Cho Choong-hoon told the JoongAng Ilbo. The number of people who wanted to see Suncheon’s nature and ecology rose sharply since 2003, he said, and pollution became a problem.

The gardens built for the expo will be kept even after the expo ends. In fact, Suncheon officials say the value of the gardens will increase with time, as the trees will grow and forests will get thicker.

“Creating a garden between the bay area and downtown would help prevent the downtown area from encroaching toward the bay area. So our expo is more about ‘preservation’ than ‘development,’?” Cho said.

Highlights of the 1.1-million-square meter (11.8-million-square foot) venue include 11 traditional gardens from the Netherlands, France, China, the U.K. and Thailand, plus 62 show gardens by renowned garden designers and installation artists as well as other organizations. Among the 62 gardens, 36 are outdoor gardens and 26 are indoor ones, so even in the capricious weather visitors will have something to enjoy.

Other attractions include an arboretum zone that features various themed trails where people can take inspiring walks; and a wetland center zone where visitors can learn more about wetlands through a museum and a greenhouse, as well as breathtaking nature such as a river and a forest.

Expo organizers have also planned a wide spectrum of cultural programs. There are 136 programs, in which some 95 teams of artists and performers will take part. The programs - which include classes on gardening, landscaping, woodworking and other traditional craftwork - will take place in various venues in and around the expo site.

Suncheon officials said on Tuesday that it has sold over 1.03 million tickets as of April 12, which was 129 percent more than they expected to sell by that date.

Suncheon officials expect 4 million people to visit the expo, with most of them being students on class retreats or families visiting in April and May and people hoping to see autumn foliage visiting in September and October.