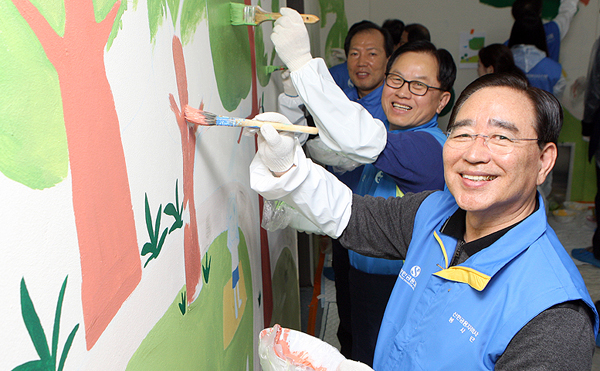 Shinhan Financial Group employees paint murals to brighten up the Grace a House, a city-run care center for people with disabilities.

Shinhan Financial Group has realized its dream of working together with the community. CEOs of the group and affiliated companies visited Grace a House, a city-run care center for people with disabilities, in Eunpyeong District, northern Seoul, yesterday. Some 70 management officials and employees painted murals to create a warm and cozy atmosphere.

The center offers medical treatment and rehab to people with mental disabilities. Shinhan supported such efforts by donating funds to update the heating system and purchase equipment like desks and fans.

“This is part of our volunteer festival. It’s a win-win activity to help local communities and individuals that include our employees and their families,” CEO Han Dong-woo said. “In addition, we will provide financial support to those eligible in conjunction with our volunteer activities. We hope to build a sense of fellowship with every community member.”

The sixth group-wide volunteer period began with the mural building event and continues until May 26. Composed of 15 programs, the so-called volunteer festival follows three distinct themes: “coexistence” to support socially vulnerable groups, “empathy” to preserve traditional culture and values in a fast-changing world, and “symbiosis” to raise awareness about the environment. Almost 22,000 employees will join the campaign.

Among the efforts is an association program that links an affiliate with a rural community to assist elderly farmers with hard labor during the harvest season.

As part of efforts to preserve traditional culture, Shinhan works on restoring cultural assets across the country.