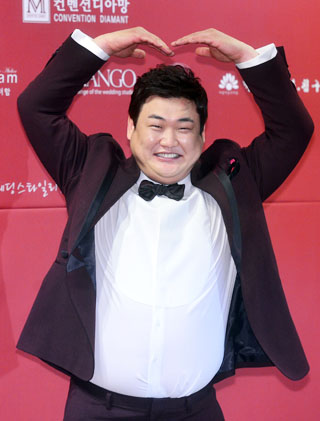 Kim Jun-hyun married a woman to whom he proposed while eating chicken.

The 32-year-old comedian tied the knot on Saturday with his girlfriend of six years in Samseong-dong, southern Seoul. His girlfriend, who studied at Hankuk University of Foreign Studies with Kim, is four years younger.

In a press conference before the closed-door wedding, Kim said that he was planning to have another proposal ceremony at the wedding.

“I proposed to her one and a half years ago while eating grilled chicken, saying, ‘We’ve known each other for a long time, so why don’t we get married?’ That’s all I said,” Kim explained.

“I got an answer from the would-be bride a year later. The proposal wasn’t so charming, so I am planning to do another today without her knowledge.”

Kim said that he is grateful that his wife has always stood by his side, even before he was famous.

He rose to stardom on KBS’s weekly comedy program “Gag Concert” after more than eight years as a comedian.