Designers at Renault Samsung Motors work on the design of a new car at the company’s center in Yongin, Gyeonggi. Provided by the company

Renault Samsung Motors (RSM) on Thursday was given a large honor by the mother company Renault Group, as its design center in Yongin, Gyeonggi was promoted as “Renault Design Asia,” putting it in charge of the region’s design projects.

But in terms of workforce, Renault Design Asia, which has 44 workers, is the second-largest within the automotive group, after France.

Renault’s design hub is about an hour drive from Seoul, located on the western side of Yongin.

There are apartments near the center of the city, but it doesn’t look like a typical downtown. The place is surrounded by mountains, giving it more of a calm and peaceful working environment.

After going through heavy security to get inside the design center, the first impression of the office resembles that of a savvy high-tech IT firm like Google, with modern desk furniture washed in sunlight from large glass windows.

Designers were busy working or drawing on their computers and digital boards when reporters took a media tour on Thursday.

Their fashionable white desks and black computer equipment arrangement was quite different from the heavy atmosphere of RSM’s Busan plant. 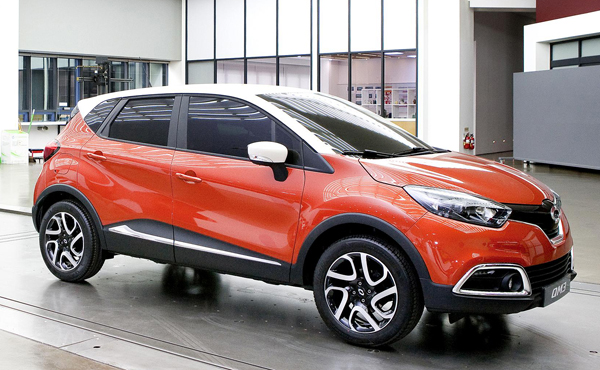 QM3 displayed at the design center. The mini SUV is scheduled to be launched in the second half of this year.

Unlike other offices, which are packed with papers and file folders, the first studio in the design center had nearly a hundred car miniatures from various auto brands lined up on the wooden bookshelves, along with figurines of robots and animation characters.

A space where the QM3, a small SUV, and its small clay model were displayed was right behind the first studio, allowing the designers to see their work brought to life.

The second studio featured the new SM5 Platinum. One vehicle was shrouded in a black car cover. RSM officials hinted it was a slightly redesigned SM5 that they were working on, piquing the reporters’ curiosity.

According to Laurens van den Acker, who heads Renault’s design, everyone at Renault Design Asia has been busy working these days as they were given two core projects to develop: a next-generation SM5, a midsize sedan, and QM5, an SUV.

“This is the first time that we will develop two completely new vehicles in Korea and this will be a challenge for the [Korean] team,” said van den Acker, who is also the senior vice president of Renault. “But I’m convinced that they can meet efficiency and quality standards.”

Van den Acker revealed that the goal of Renault Design Asia would be to increase activity and increase the presence in Asia. He said it is too early to tell whether 44 people is a sufficient workforce to carry out the projects, but Renault will learn from experience and take measures to support growth.

The 44-year-old designer from the Netherlands said converging Renault & RSM’s design strategies is important for success, while expecting the QM3 to be a winner.

He said Korean consumers change their tastes quickly, such as in hatchbacks, meaning that the design center someday might take charge of designing small cars as well.

Van den Acker, who previously worked for Audi, Ford and Mazda, said that the French design in general can be described as “seduction.” However, when it comes to car design at Renault, he said they focus on humanity, making “human-centric” its design keyword.

Following the taste of the Asian market, which prefers larger sedans, Van den Acker said that the group will ask for more insight from the Korean unit.

“For sedan, the keyword should be ‘statutory,’?” he said. “We will use the insights of the Korean design team because they are familiar with this concept.”

RSM designers said they are working hard to implement the needs and tastes of Korean customers, as they admitted their older models with European design colors don’t receive much appreciation in the local market.

But Van den Acker said that Renault’s design center will not be only driven to either separately increase sales or pursue beauty, but both at the same time.

“A famous American designer once said that most beautiful line in design is the rising line on a sales chart, but good design is about making your life more enjoyable and improving your daily life,” he said. “In the end, good design benefits the company.”