Workers fight Battle of the Flowerbed

Workers fight Battle of the Flowerbed 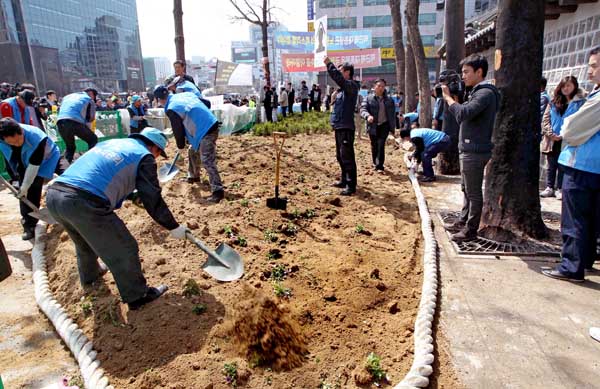 A laid-off worker from Ssangyong Motor, center right, stands off against workers from the Jung District Office Wednesday in the flowerbed installed at the sit-in protest site near Daehanmun, the main gate of Deoksu Palace in central Seoul. [NEWSIS]

Three times a day, six days a week, an enactment of the changing of the guard of the Joseon era is performed outside Daehanmun, the main gate of Deoksu Palace, in central Seoul. Colorfully clad soldiers beat drums, exchange passwords and hand over the keys to the gate of the palace.

But a real battle that shows no signs of winding down is taking place a few steps away. It’s the Battle of the Flowerbed, pitting laid-off workers from Ssangyong Motor and their supporters against the Jung District Office.

The workers started a sit-in last April in front of Daehanmun to protest their laying off by the country’s smallest automaker in 2009. They erected tents on the pavement outside the gate and right by the crosswalk that connects the Seoul Plaza and the palace and occupied the site 24/7.

In March, a 52-year-old serial arsonist set fire to the tents early one morning, telling police later he was “cleaning up the dirty city.” The fire consumed two of the tents and charred 27 rafters of the palace, which cost 30 to 40 million won ($35,748) to be replaced.

The district office decided enough was enough and declaring the sit in an illegal occupation of public space, cracked down on April 4. Around 6 a.m. that morning, about 50 officials of Jung District Office approached three tents in which three protesters were sleeping and removed them as 280 riot police stood by in case of scuffles.

The sneak raid took only 10 minutes to complete. After removing the tents and other materials, the Jung District officials created a flowerbed so the workers couldn’t rebuild their tents.

Or so they thought.

At 1 p.m. yesterday outside Daehanmun, six desks occupy the sidewalk close to the crosswalk to Seoul Plaza. Behind the desks is the flower bed, but it’s hard to see because of a fence that has been festooned with banners and posters with messages supporting the workers, such as: “President Park Geun-hye! Investigate the Ssangyong case again!”

Around 30 police officers from the Namdaemun Police Precinct stand by to prevent any trouble.

“I heard that the district office removed the sit-in camp to give more space to pedestrians, but it’s worse than before,” complained Park Hoon-cheol, a 53-year-old banker. “It’s even more crowded due to the stupid flowerbed and these protesters.”

Last Friday evening at 9:30 p.m., about 200 protesters including some university students and civic group members staged a rally in support of the workers. About 20 of them crossed over to the flowerbed. When the police tried to pull them out, some of them sprawled out in the space. Many of flowers were uprooted and some fences were damaged.

Because of the scuffles, the changing of the guard ceremony at 11 a.m. on Wednesday was canceled, forcing about 200 tourists including dozens of foreigners to walk away.

“I was scared as soon as I saw some police officers and heard loud noises at a tourist site,” said Lei Liu, a Chinese tourist.