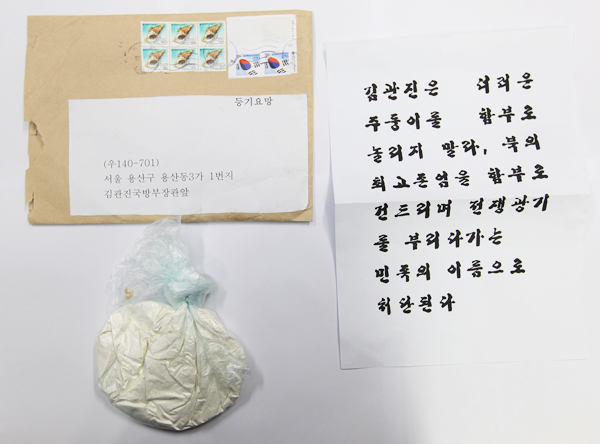 A menacing letter containing a white powder that was later identified as common flour was sent to South Korean Defense Minister Kim Kwan-jin yesterday, while the Southern military remains vigilant against any military provocations from the North.

According to the Ministry of National Defense, at around 10:12 a.m., a yellow manila envelope arrived at the office of the ministry in Yongsan District, central Seoul. A piece of white paper was taped on the envelope, showing the ministry’s address and “To: Defense Minister Kim Kwan-jin” in Korean, apparently typed on a computer.

There was no sender’s name or return address. In the envelope, there was a handful of suspicious white powder in a white plastic bag and a note, also typed, saying: “Kim Kwan jin, don’t speak recklessly with your dirty mouth. If you dare to provoke the utmost dignity of the North [Korea] carelessly and commit warlike madness, you will be punished in the name of the people.”

A Defense Ministry official told reporters that the powder was benign.

“After a fine analysis, the powder was flour,” the official said. “Although there is no poisonous material, we consider it an attempt at terrorism against a high-profile figure and decided to find out who the sender was.”

The parcel arrived in the mailbox of the ministry at the Yongsan Post Office, according to the ministry. Security guards X-ray all parcels and letters taken from the post office before handing them over to receivers. The parcel was caught by the X-ray screening. The ministry believes the culprit could be the same person who spread a total of 494 leaflets near the ministry building on Friday that contain the same message on the note.

An e-mail, which had a similar message as the letter, was also sent to 23 South Korean reporters on the same day, Friday, from an unnamed user with address “wkwnxhddlf904@yahoo.com,” which is code for “independence reunification” if the same keystrokes are typed on a Korean keyboard.