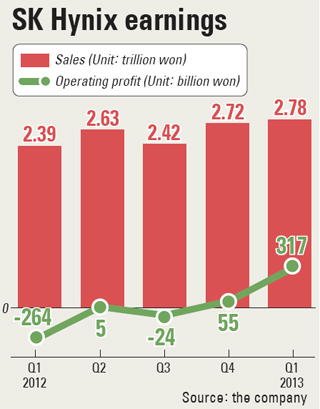 The earning surprise - despite the fact the first three months of the year sees low demand due to seasonal factors - has been due to increased profitability of dynamic random access memory (DRAM) chips and NAND flash memory. During the same period a year earlier, SK Hynix had an operating loss of 264 billion won.

Sales at the world’s second-largest computer memory chip maker were 2.78 trillion won for the quarter ended March 31, up 16 percent from a year earlier.

Shipments of DRAM chips advanced 3 percent on-quarter, mainly due to a virtuous circle among chip makers - SK Hynix, Samsung Electronics and Micron - tightening the supply of the high value-added, lucrative chips for personal computers and data center servers. The average price of DRAMs picked up 4 percent from the previous quarter.

“Sales of DRAMs for personal computers accounted for more than 30 percent of entire sales, whereas we initially predicted the figure at around 20 percent, followed by DRAMs for mobile devices at almost 20 percent,” said Kim Jung-soo, head of investor and public relations at SK Hynix, in a conference call yesterday morning.

The portion of mobile DRAMs is expected to grow to the 30 percent range in the second quarter, he added.
NAND flash shipments in the first quarter edged down 1 percent on-quarter while their average price declined 5 percent over the same period as demand for mobile devices retreated, the company said.

SK Hynix came up with an upbeat outlook on the second quarter, too. With its major clients - mobile phone manufacturers including Apple - set to come up with new gadgets in the April-June period and the Chinese smartphone market on a constant rise, strong demand for mobile DRAMs and Multi-Chip Packages, or MCPs (mostly embedded in smartphones that require compact accommodation of multiple chips) is expected, the company said.

“The contribution of rising DRAM prices to the earnings is expected to be bigger in the second quarter,” said Ahn Sung-ho, an analyst with Hanwha Investment and Securities.

Meanwhile, LG Electronics said in a regulatory filing yesterday its operating profit in the first quarter declined 13 percent from a year earlier to 349.5 billion won while sales were up 7 percent to 14.1 trillion won.

The nation’s second-largest electronics maker saw a silver lining at its mobile communications, or MC, division, which has smartphones as a key product.

Sales in the division in the quarter ended March 31 stood at 3.2 trillion won, up 29 percent on-year.

For the first time in the No. 2 smartphone producer’s history, it posted quarterly smartphone sales of over 10 million units, the Samsung rival said.

Meanwhile, in a separate regulatory filing yesterday LG said it would acquire 100 percent stake in V-ENS from its affiliate LG CNS May 1 for 17 billion won. The merger will be completed on July 1.

LG said it hopes the acquisition will boost competitiveness in its auto parts business such as auto infotainment.