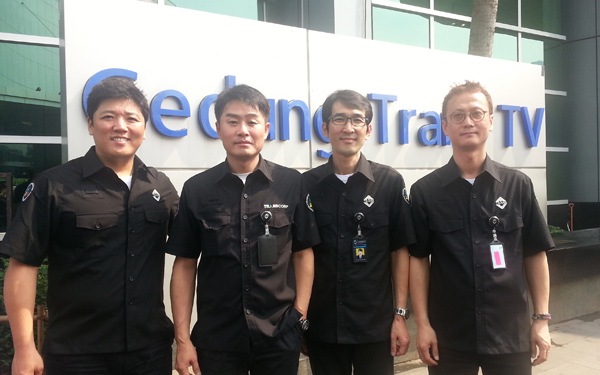 To see the power of the Korean Wave abroad, look no further than Southeast Asia.

As the region continues to revel in all things Hallyu, local business there are starting to shake things up with a dose of K-entertainment.

And to do so, they are looking to Seoul for inspiration.

In a bid to revolutionize programming, Trans TV, one of Indonesia’s leading networks, recently brought four Koreans into the organization.

Just days before embarking on the new adventure as a special executive producer, Kang Gyu-teack sat down with the Korea JoongAng Daily to discuss his plans for Trans 7.

Kang, who hails from a producer and director background, stepped into the Korean media landscape at SBS back in 1996. With some 17 years of experience, there is hardly a television genre he hasn’t touched - from dramas to kooky primetime weekend shows.

After building up his knowledge at one of the nation’s leading networks, Kang spent some time as a content executive at production company Olive 9 in 2001 before establishing his own company Blue Panda in 2008.

He is the brains behind such programs as “Tray Karaoke” - a variety show on which trays are dropped as penalty if a celebrity sings a verse incorrectly.

Kang has mixed feelings about starting anew. “Initially I was a bit skeptical,” Kang said.

With his business at the top of its game, the proposal from abroad was not all that appealing.

“But then I found out through a friend that they’ve been recruiting others, too,” he added. And after doing some fact-checking and speaking to others presented with similar offers, wheels started turning.

“At first I thought I’d just be a sort of media liaison, but then I found out that I was bringing over a team,” he explained. Kang will be joined by director Han Kyung-jin and special executive producers Park Jong-ho and Park Jung-hoon.

With that in mind, Kang said producing original programming for Indonesians seemed to make sense.

According to statistics from Arirang Radio, a broadcast network that promotes Korean culture abroad, Indonesia sits near the top when it comes to foreign countries consuming Korean culture.

For instance, Indonesians rank fourth or fifth among listeners of “Catch The Wave,” an Arirang program, in a given week.

And it isn’t just Indonesia that has the K-fever.

“K-pop is really a phenomenon,” said Ho Yoke Ping, general manager for sales and marketing of the Malaysia Convention and Exhibition Bureau, a new organization that has hosted scores of K-pop concerts.

Ping visited Korea this week to meet with potential clients, a lot of them K-pop related businesses. One of the best things about K-pop, according to Ping, is its ability to transcend borders.

“We are made up of Malay, Chinese and Indians, too, but everybody likes K-pop,” said Ping who confessed that she is also a fan of Korean dramas.

And Kang is mindful of the varied demographics he moves to producing hits for a pluralistic nation.

“It’s a challenge, you know, to take on a new environment, and of course, I’ll have to learn the language, culture and so forth to make it work,” he said. “They love all things Korean at the moment, so it’s an exciting time to be a part of that.”

But more than that, Kang said he is focused on a long-term vision, saying they’ll take their time to get it right.

“It’s a five-year contract, and who knows, I might stay on afterward.”