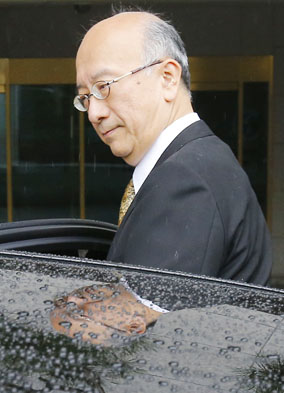 Japan’s Ambassador Koro Bessho gets in his car after being summoned to the Korean Foreign Ministry office yesterday. It was the first time since July 2011 for the ministry to summon a Japanese ambassador to Seoul to lodge a protest over historical and territorial issues. By Oh Jong-taek

Kim said it was “impossible to comprehend how [Tokyo] could turn a deaf ear and blind eye to the immeasurable pain and damages caused to its neighbors by Japan’s invasion and colonial rule.”

The ambassador replied he would convey the message to Tokyo.

On Wednesday, Abe responded defensively to a backlash from Seoul and Beijing after Japanese ministers including Deputy Prime Minister Taro Aso and nearly 170 lawmakers, almost twice the number of the previous year, visited the Yasukuni Shrine, which commemorates the war dead including Class A war criminals.

“Our ministers will not cave in to any threats,” Abe stated at a parliamentary budget panel, adding that it was “natural to honor the spirits of the war dead.”

He said that there was a noted increase of protests about the Yasukuni Shrine during the Roh Moo-hyun administration, a little in the Kim Dae-jung administration and almost none before and that “there is a need to examine the sudden change in attitude.”

He said that it was his job to “protect our pride, which rests on history and tradition.”

In reality, Japanese prime ministers paying respects to the war dead at the Yasukuni Shrine dates back to 1985 when Prime Minister Yasuhiro Nakasone made an official visit, resulting in a Korean government protest.

The next prime minister to visit the war shrine was Ryutaro Hashimoto in 1996, who called his visit “private.” Starting from 2001, Prime Minister Junichiro Koizumi made six visits to Yasukuni though it is disputed whether they were in a private or official capacity.

Abe did not visit the Yasukuni Shrine in person but made a ritualistic offering of a tree branch Sunday.

“If we do not deliver a clear, strong message to Japan, they will think they can get away with treating Korea in any sort of manner,” a senior Korean foreign affairs official said.

Japan’s Chief Cabinet Secretary Yoshihide Suga said yesterday after the summons of the Japanese envoy, “It is natural to express respect to the people who sacrificed their lives for the nation.”

On Monday, Seoul canceled Foreign Minister Yun Byung-se’s visit to Tokyo, which was to include his first bilateral talks with Japan’s Foreign Minister Fumio Kishida, in response to the Yasukuni Shrine visits Sunday.

Beijing and Seoul were further angered by Japanese lawmakers’ Yasukuni visits on Tuesday.

Tension flared that day when Chinese and Japanese government boats converged on disputed islands in the East China Sea.

The Japanese Coast Guard claimed eight Chinese government ships entered waters near the islands that both countries claim, called Senkaku in Japanese and Diaoyu in Chinese. The Japanese Foreign Ministry summoned China’s ambassador and lodged a formal protest over China’s intrusions, calling them “unacceptable,” while Beijing responded that Japan intruded on Chinese territory.

Abe made comments in the upper house of the Diet Tuesday that seemed to deny Japan’s invasion of Asian nations before and during World War II.

The international press and even some Japanese media criticized Tokyo’s fueling of tensions in Northeast Asia.

The New York Times in its Wednesday edition published an editorial, “Japan’s Unnecessary Nationalism” critical of Abe and other right wing politicians, concluding, “Instead of exacerbating historical wounds, Mr. Abe should focus on writing Japan’s future.”

A front-page column in the Asahi Shimbun published Wednesday, “Ministers’ Yasukuni visits stir up ill will,” called the visits by ministers and lawmakers “shallow” and stated that “while visiting Yasukuni Shrine is a spiritual matter, it is also one that affects others.”

The column continued, “Why do we have to weigh the feelings of other countries for matters that do not concern them, one might ask. But such thinking, which fails to imagine other countries’ feelings, is nothing but self-righteousness that becomes useless once it crosses national borders.”