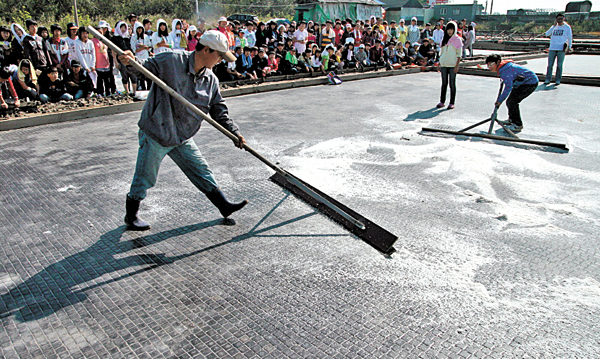 Young participants harvest salt under the direction of a salt master at Dongju Salt Field on Daebu Island, Ansan, Gyeonggi. Provided by the orgainzers

The Dongju Salt Field is known for its exciting programming. Its experience program is available between 11 a.m. and 3 p.m. every day at a cost of 8,000 won ($7.21) per person. For just 4,000 won more, participants can make sun-dried salt themselves. An administrative office that was built in the early 1900s to oversee the salt field helps preserve some of the area’s traditional image. Bus No. 123 goes directly to the salt field. (010) 5441-6829

Gomso Field becomes yellow in mid-May due to pine tree pollen that flows from a field at nearby Naeso Buddhist Temple. The sun-dried salt covered by pine tree pollen is truly a delicacy. Buan County will provide a cultural heritage guide for groups of 10 or more. (063) 580-4714

Byutgari Village, a small town nestled near Taean Port, still boasts salt fields, which used to be an important industry in the area. For 10,000 won, the owner of a small salt field in the village will allow tourists a chance to visit. Reservations should be made two weeks in advance. (041) 672-7296

All facilities at this state-of-the-art salt field were renovated in 2007, bringing traditional into modern times. Only groups of 40 people or more can participate in tourist programs at this site. (061) 352-9301