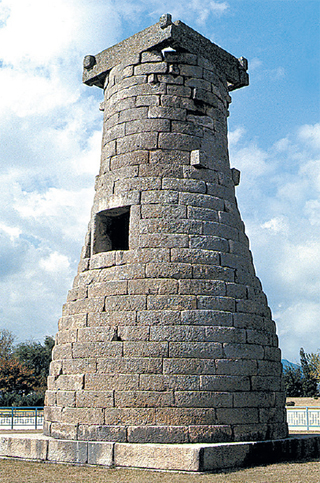 It is an astronomical observatory from the Silla era through which the movement of heavenly bodies were observed. The stone building, which is 9.17 meters (30 feet) tall, is near the Royal Tomb of King Naemul.

Astronomy was related to agriculture and politics because the movement of the heavens could influence farming schedules and foretell a nation’s luck.

Astronomy was of great interest to the nation during the early times, and so the observatory was built.

The observatory is estimated to have been built during the period of Queen Seondeok (632-647) in the Silla Era. It now leans slightly to the northeast, but otherwise remains almost unchanged and is highly valued as the oldest astronomical observatory in Asia.

The Silla people made the cylinder by piling 27 steps of fan-shaped stones, and the outer face is trimmed smooth. The surface of the inside wall, however, is not even because of protruding endings.

The record of an ancient book says, “People can climb up through the middle.” It seems that someone put a ladder on the outside of the observatory, went inside through a window, then climbed up to the top using another ladder to observe the heavens.