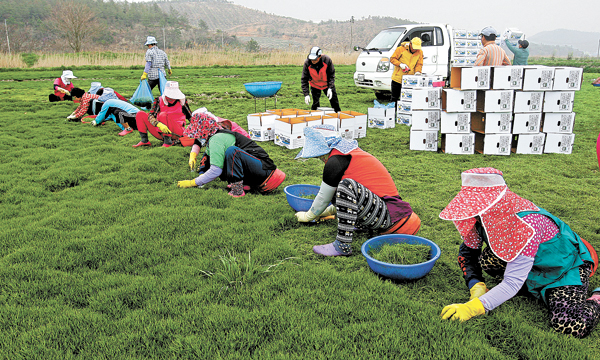 Members of a cooperative in Haenam County, South Jeolla, jointly farm herbs as part of their efforts to build a more efficient marketing system for the crops they grow. By Oh Jong-chan

Small-scale, back-to-the-land farmers are forming cooperatives in an effort to better reach out to more consumers.

There has been an influx of urbanites into rural communities - mainly in search of R&R - and they are now keen to make the market work for them.

After retiring, Pyun Yong-gil, 70, moved from Seoul into a rural area in Chungju, North Chungcheong in 2008 and began growing blueberries on his 10,000-square-meter (2.47-acre) farm.

He recently established an association of some 30 blueberry farmers in the region to share farming knowledge and different concerns regarding the cultivation of the fruit every other month.

“I thought farming wouldn’t be that hard, but once I started, it was challenging,” said Pyun, explaining how he came to form the organization.

“When we share our farming experiences together, we learn a lot from each other and I get more confident,” he said.

In line with their push to be business-savvy, many of those farmers supply their agricultural products to the direct retailer Heuksalim, where organic fruits and vegetables are sold via a more direct supply chain at cheaper prices. 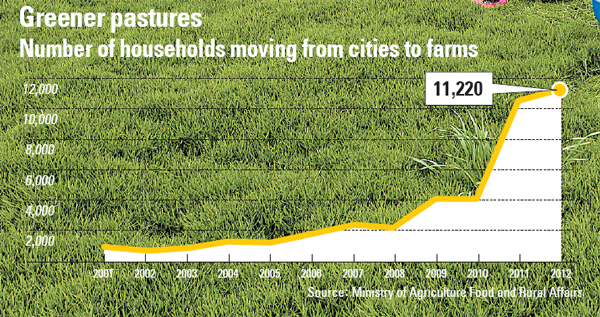 “Before that, market conditions had a big impact on my income,” he said.

Kim Jun-bae, manager of the retail company, said that many farmers had faced trouble selling their crops as small-scale farmers.

“The farmers didn’t have a stable distribution system before, and things changed depending on the season,” he said.

“But now their products are sold along with other products so it kind of hedges against unstable market conditions.”

What farmers without any corporate affiliation try to achieve is economy of scale by jointly harvesting and providing their crops in bulk.

Such a scheme enables them to cut out unnecessary middlemen and bring about more profit.

“For small-scale farmers, pooling resources is really important and cooperative farming is an ideal way of earning stable income,” said Choi Byung-wook, a researcher at the Korea Rural Economic Institute.

“We need to expand the co-op system to allow farmers to earn a stable income,” Choi said.

The members of a cooperative in Haenam County, South Jeolla understand the importance of scale more than anybody.

They have jointly farmed and sold herbs on a 35-acre-field since 2007. The cooperative works together on agricultural production, including gathering seed, fertilizer and fuel as well as machinery services.

The members, comprised of 16 farmers, last year made 50 million won in revenue.

“When I farmed alone, I couldn’t gain the trust of merchants because the annual yield was unstable,” said Lim Myung-sik, a farmer belonging to the group.

“But when we produce our crops in groups, the quality and quantity of herbs improved. We now supply them to Daejeon and Seoul, which was impossible before,” Lim said.

This kind of success story has drawn a record number of people to the countryside.

The experts in the agricultural sector point out that the new co-ops, if unprepared, are likely to plunge into financial hardships.

“If they just dream of a ‘rural idyll’ and don’t prepare, they will face a lot of challenges,” said Lee Jae-ryong, an officer at the Rural Development Administration.

“They need to be actively engaged in meetings and other events to improve their technology and other extra information,” Lee said.

Uhm Se-woong faced a lot of tough challenges when he first moved into the countryside in Wonju, Gangwon.

“I came to a region that I didn’t have any ties with and everything was new and unfamiliar. So it was hard to adapt to rural life at first,” he said.

“But I kept trying to meet as many people as possible and respect their way of life. Then, people began trusting me.”