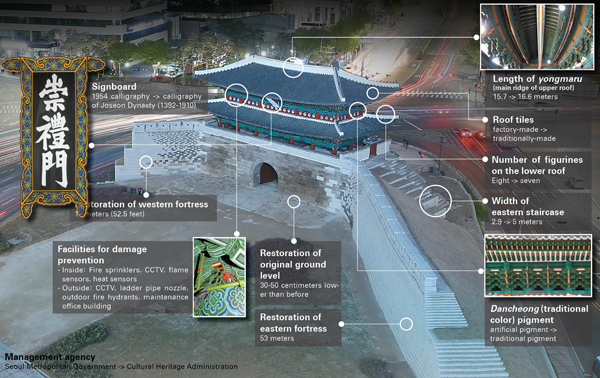 The history of the Joseon Dynasty (1392-1910) can be summed up in a few words: Constant struggles to protect itself from enemies at home and abroad - pretty similar to modern-day Korea.

That’s why King Taejo (1335-1408) ordered a city wall be built around the capital shortly after he declared Hanyang (the old name of Seoul) the capital of the new dynasty. 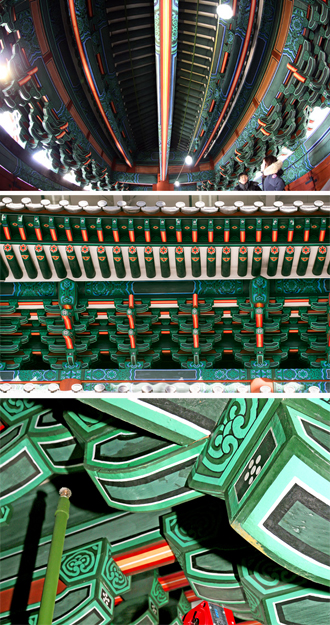 “The wall of [Seoul] is imposing in itself; in position, it is well-nigh matchless. In building it, difficulty was ignored and height forgotten. From whatever point you gaze, within the city or without, it is one of the most striking features of a most striking landscape,” Percival Lawrence Lowell (1855-1916), an American businessman, mathematician and astronomer, wrote in his book “Choson: The Land of the Morning Calm,” after visiting Seoul in 1883. “Like some great python, it lies coiled about the city, stretched in lazy slumber along the very highest points - over peaks where it can, along passes where it must.”

Sungnyemun, popularly known as Namdaemun, was one of the four major gateways to the capital during the Joseon era. Namdaemun literally means the “great southern gate.”

Seonbi, or scholars of noble background, from outside Seoul passed through here to take the gwageo, or the state examination that recruited ranking officials, hoping to change their fortune and possibly, the world; foreigners like Lowell passed through the gate to experience the highly-closed society; invaders like the Japanese soldiers marched through the gate in attempts to encroach on the seemingly weak dynasty. It appears the gate left an impression on Lowell, as well, as he wrote in his book, “They are as imposing as they are important; and they are among the finest buildings in the city, unless it be contended that they are outside it.” Historians say the leaders of Joseon named the four large gates of the capital after four virtues that Joseon valued: The eastern gate after mercy, the western gate after loyalty, the northern gate after righteousness and the southern gate after courtesy.

So it was a tragedy when Sungnyemun, or “the gate of courtesy,” was burned down on the cold evening of Feb. 10, 2008, by an old, unhappy man. Many Koreans felt powerless and have shed tears since the fire engulfed the 600-year-old relic.

More than five years have passed and the gate stands in front of us again. There have been many controversies over whether the cultural property authorities were doing a good job with the restoration in terms of historical research, traditional methods and budget utilization.

The Korea JoongAng Daily summed up some of the interesting aspects of the restoration.

From left: A photo of Sungnyemun by George Rose, an Australian photographer, in 1904 shows the wall and thatched houses outside the wall; the arson attack in 2008 shocked the country; the restored gate opens to the public on May 5. [JoongAng Ilbo], provided by the CHA

This gate’s got “wings”

The 2008 fire was certainly a catastrophic event.

But it can’t be denied that the restoration has transformed Sungnyemun closer to the way it was during its earlier years. The gate’s form has changed many times through alterations and damages during the Japanese colonization (1910-1945), the Korean War (1950-53), industrialization and city development projects between the 1970s and 1980s.

The biggest alteration was probably the cutting of the walls that stretched from the two sides of the gate, which resemble wings. According to historical records, it was in 1907 that the teardown began. It is widely believed in Korea that the cutting took place because of the Japanese. In October of that year, Japanese Crown Prince Yoshihito visited Seoul, and there is a tale that Japan deemed that it was a “humiliation” for a Japanese crown prince to enter through the gate.

There are, however, no historical records that say that the cutting of the wall was ordered by Japan per se.

So the theory that the teardown of the wall was due to the Japanese is only based on circumstantial evidence now, given that of all parts of the wall it was the parts around Sungnyemun that were cut first and that timing coincided with the Japanese crown prince’s visit.

There are some scholars who say that the teardown would’ve happened anyway as the city developed, population increased and new forms of transportation like streetcars were introduced.

“Taking down the city wall was probably inevitable. In fact, such cases can be found in the histories of other countries as populations grow and cities modernize, too,” said Ahn Chang-mo, a professor of architecture at Kyonggi University.

It’s impossible to fully restore the walls, but the cultural heritage authorities restored part of the walls - 53 meters (173.9 feet) on the western side of the gate and 16 meters on the eastern side. The asymmetrical restoration might not be pleasing to the eye, but it had to happen within boundaries that would not disrupt traffic.

A majority of the stone used for the restoration came from quarries in Pocheon, Gyeonggi. “The components of the stone from Pocheon is 95 percent similar to the stone in the remaining wall [of the Joseon era],” said Lee Ui-sang, the stone expert and Important Intangible Cultural Heritage No. 120, which is a status given to people with traditional skills recognized by the government. Lee was in charge of the restoration of the walls. 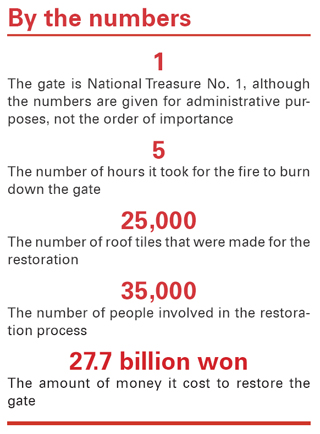 Besides the walls, another noticeable change to the restored Sungnyemun is the colors.

It’s because of the new dancheong, or color decorations for traditional Korean wooden structures. According to the Cultural Heritage Administration (CHA) - which took over the management rights of the gate from the Seoul Metropolitan Government after the fire, experts sought to color the new Sungnyemun in the dancheong pigment closest to the early years of the Joseon Dynasty.

Hong Chang-won, the dancheong master and Korea’s Important Intangible Cultural Heritage No. 48, says there have been six coloring processes that took place on the gate between the latter part of the Joseon Dynasty and 1988. He said in previous colorings chemical pigments were used to create the colors, but the artisans and government officials sought to use traditional pigments made of stone, soil and shells.

“It was regrettable to find out that traditional pigments were rarely produced in Korea. We had to use some traditional pigments from China and Japan for such reasons,” Hong said in a column for a government magazine this month. “After numerous experiments and discussions, we’ve decided to be less picky about the nation of the manufacturer and consider more about the quality of the pigments.”

Hong decided that among the six colorings that took place previously, the 1963 process was the closest to the early Joseon period and he used the blueprints and documents from that process for his work. He reviewed dancheong works on structures like Myeongjeongjeon of Changgyeong Palace, which are in line with styles of the early Joseon times. The resulting colors use a lot of blue and green and patterns of lotus flowers and waves.

“I hope through this opportunity, we make more efforts to preserve the traditional coloring techniques,” he said, referring to Japan, where such techniques are carried on for hundreds of years and old structures are repainted according to those techniques every 20 to 40 years.

Another interesting aspect of the Sungnyemun restoration is how a 3-D laser scan technology saved the gate. According to media reports, a company that develops the technology was asked by the CHA in 2002 to use the technology to save the data on the gate. Although there was a handwritten blueprint of the gate, the data greatly helped the restoration, the Chosun Ilbo reported last month. Realizing the usage of the technology in saving cultural heritages, the CHA also finished the 3-D laser scanning on some structures in Changdeok Palace, Changgyeong Palace - both in Seoul as well as some treasures at the Gapsa Temple in Gongju, South Chungcheong, the report said.