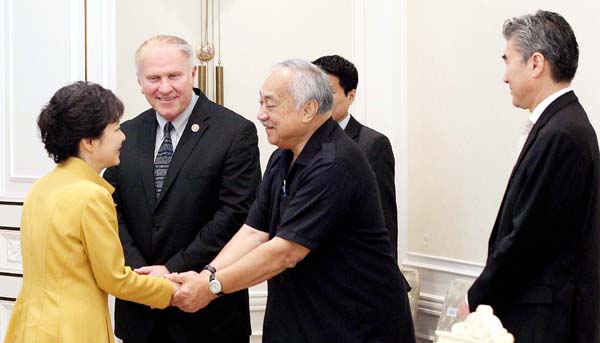 President Park Geun-hye welcomes Steve Chabot, second from left, chairman of the Subcommittee on Asia and the Pacific of the U.S. House of Representatives, Eni Faleomavaega, third from left, ranking member of the committee, and U.S. Ambassador Sung Kim, right, to the Blue House yesterday. [Joint Press Corps]

President Park Geun-hye’s latest decision to pull the plug on the Kaesong Industrial Complex, the last remaining cooperative venture between the two Koreas, is meant to press China to use its influence over Pyongyang, senior government officials said yesterday.

The Park administration said Friday that it will pull out all remaining South Korean workers from Kaesong, effectively shutting down the eight-year-old project, after Pyongyang twice rebuffed Seoul’s calls for dialogue to normalize the situation. Work there came to a halt after Pyongyang withdrew more than 53,000 workers on April 8.

At the recommendation of the government, South Korean businessmen who operated factories in Kaesong pulled their workers out of the facility on Saturday. The final group of 50 was scheduled to come back to the South yesterday afternoon.

While Park’s decision had the primary goal of protecting the South Korean people’s safety, it was also interpreted as a carefully calculated move to press China to use its leverage on the North, Seoul officials and experts said yesterday. They said Park’s decision was a message to China about its role as a key ally of the North.

A senior official told the JoongAng Ilbo that Seoul has informed Beijing in advance about its decision to withdraw South Korean workers from Kaesong and exchanged opinions.

“The move was to urge the North to change its attitude,” he said. “And at the same time, it was also to request that China perform its role to influence the North.”

He said China has ultimate leverage to stop the North from continuing provocations but has yet to use it.

“If the situation comes to the point that it is impossible for China to defend the North in the international community, then Beijing will have to act,” he said. “We want to make clear to the international community that the North can no longer be trusted [even through we had to pay the price for shutting down Kaesong] so that China can no longer defend the North.”

A senior official at the Blue House said there won’t be any trust if North Korea shakes up inter-Korean agreements. “North Korea will be isolated not only from China but also other countries,” he said.

China has not yet completely cut its supply of crude oil and basic food to the North. Park’s decision to withdraw South Koreans from Kaesong will dramatically change the situation, officials at the Blue House and the government said.

Experts also agreed with the strategy. “If the North continues to escalate tensions with its military threats, China cannot just sit with folded arms,” said Jeung Young-tai, a senior researcher at the Korea Institute for National Unification. “If the North continues its bad behavior, the possibility will grow for China to join the efforts of the South and the United States to counter the North.”

“To bring back as much as they can, our workers loaded bags of goods on top of their cars,” Park said yesterday morning at a senior secretariat meeting. “And the world watched the scene through TV. The two sides’ agreement came to nothing in the blink of an eye, and who in the world will make an investment in the North from now on?”

Later in the day, Park once again stressed the importance of the North living up to its past commitments to avoid increased isolation. In her meeting with U.S. Representative Steve Chabot, chair of the Foreign Affairs Subcommittee on Asia and the Pacific in the House of Representatives, Park said that Koreans and the world witnessed the South Koreans’ withdrawal from Kaesong. “How can this happen? It is such an unpredictable place,” she said.