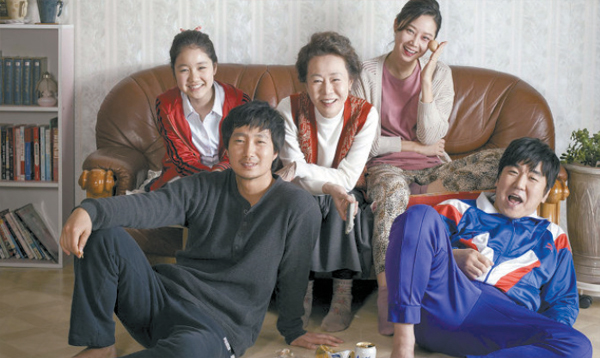 In “Boomerang Family,” the 69-year-old mother, center, must still work to feed her grown children. Provided by CJ Entertainment

The mother is 69 years old but still works hard to feed her eldest son, who is already overnourished. He spends his days flipping through comics, scratching his rippling belly fat and munching on snacks. At 44, his only accomplishment is being convicted of a crime.

Soon enough, the mother is also welcoming her two other grown children back home.

The daughter also shows up with her troubled teenage daughter after her second marriage ends and she decides to live like a Buddhist nun.

The average age of the three children is 39, and they come to get together under the roof of a run-down house located in the outskirts of Seoul. And that is where “Boomerang Family” unfolds.

Based on a novel of the same name written by Chun Myung-gwan, the film gathers the nation’s top character actors in a dysfunctional family.

The first part of the film focuses on the characters, especially the two sons, revealing their old yet still immature souls. The three siblings often vent their anger at each other.

The numerous conflicts and swearing scenes are a little exaggerated, but the three siblings should remind viewers about the tendency to be especially mean to close family.

The conflicting siblings, however, enter a new phase as the teenage daughter of Mi-yeon runs away from home. The runaway leaves a note that she can’t put up with her broken family.

At this point, the film may have lost its witty tone, but its biggest virtue is the obvious message about mothers.

The most memorable scene is probably when all of the family members sit down to eat their first meal together. Steamy stews and neatly placed side dishes have all been diligently prepared by the aging mother who always encourages her grown-up children to gather in the sunlit living room. The sign of pure commitment to family is quite calming.

After the first meal scene, others follow, all aiming to make sure the three children gain the strength needed to carry on and upward. They owe a lot to their mother, who keeps boiling stews and grilling pork belly for her children.

Fortunately, “Boomerang Family” doesn’t resort to the obvious formula of an ailing mother who has only a few months to live, prompting her indifferent family to realize how much they owe her. But there still are disappointments.

Since the film is mainly focused on the two sons, it seems to neglect the mother and the daughter, unlike the novel. If there were more stories about the two female characters, the film could gain some complexity. It is a shame that the director does not make full use of the two brilliant actresses.

He also tweaked the ending of the film to encourage mass appeal by highlighting the bond between brothers, but the film ends up concluding in a cliched trap.

Even so, “Boomerang Family” is a breath of fresh air among a sea of run-of-the-mill family-themed Korean films because of actors who truly know how to breathe life into their characters.