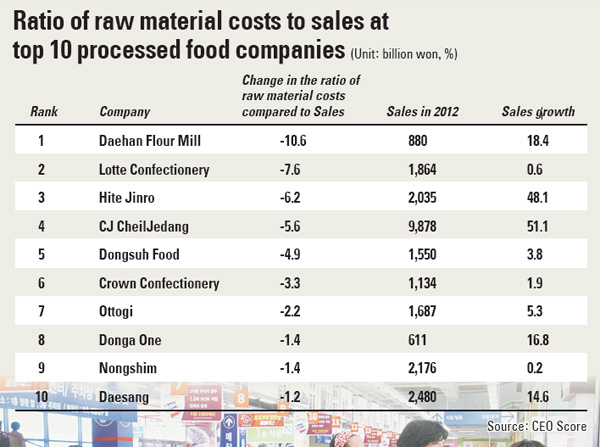 Companies have justified trying to raise the price of processed food products by citing increased costs for commodities, but a new study shows the rise in raw material costs compared to their sales revenue was relatively low last year.

“Due to the rising price of flour, we are considering raising prices of pastry products. We did not raise the price in 2011 when the flour price also went up, but it is difficult not to this time around,” SPC Group, which operates Paris Baguette, Dunkin’ Donuts and Caffe Pascucci, said earlier this year.

However, local research firm CEO Score said yesterday their claims are dubious, since raw material costs as a share of their revenue fell last year from 2011.

According to CEO Score, the top 19 processed food companies spent 45.2 percent of their revenue on raw materials last year, down 1.7 percent from 2011.

Only seven companies - Orion, Lotte Chilsung Beverage, Namyang Dairy Product, Maeil Dairy and Samlip Food - saw raw materials eat up a larger share of their revenue in 2012 than in the previous year. 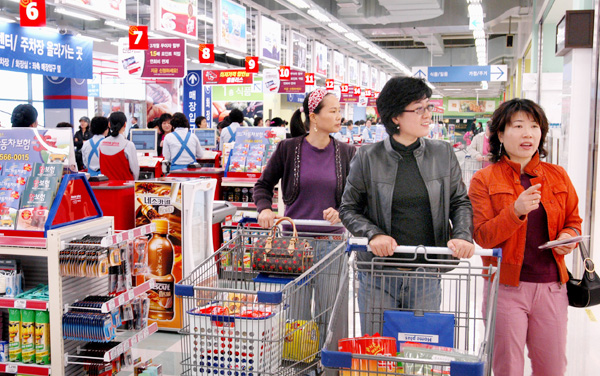 At CJ CheilJedang, which had the largest sales among the 19 companies, the proportion of raw material cost dropped to 55.2 percent last year from 60.8 percent in 2011.

Nevertheless, the company jacked up prices of flour by 8.8 percent and of sauces by 7.1 percent in January, citing rising international commodity prices, CEO Score said.

The company that saw the biggest drop (10.6 percentage points) in the ratio of raw material costs to sales was Daehan Flour Mills. Thanks to the price decrease in international commodity prices, Daehan’s operating profit soared by 437 percent last year.

Nevertheless, Daehan raised prices for its flour products by 7 percent to 9 percent earlier this year.

Meanwhile, those companies that didn’t increase prices at the end of last year and during the government transition period are showing signs they intend to now.

Haitai Confectionery notified convenience stores Wednesday that it would raise the price of its flagship cookie Buttering from the 1,400 won ($1.26) to 1,500 won. Haitai explained that the weight of the cookies will increase from 80 grams to 86 grams (3.03 ounces). “We can’t say it is a price hike,” said the company.

This month, Ottogi cup noodle products, such as Sesame Noodles and Yeol Ramen, will go up by 50 won to 100 won at convenience stores. Ottogi said the increase was due to suspension of promotional discounts to retailers.

The retail industry predicts attempts to raise prices will continue.