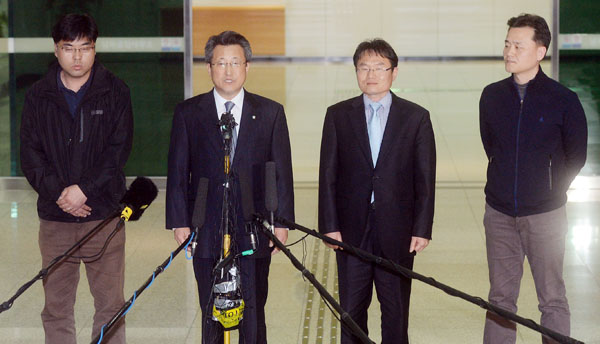 Hong Yang-ho, second from left, a former unification vice minister who heads the Kaesong Industrial District Management Committee, has a brief news conference at the Customs, Inspection and Quarantine Office in Paju, Gyeonggi, yesterday immediately after the last seven officials returned to the South. [NEWSIS]

The South Koreans were allowed to leave the complex around 6:30 p.m., according to the Ministry of Unification.

Former Unification Vice Minister Hong Yang-ho, one of the seven to return yesterday after a week of negotiations with the North, said afterward at a press conference at the customs office in Paju, “Thanks to all of your support we were all able to return to the South safely.”

He said the specifics of any agreement with North Korea “will later be revealed by the government.” Hong is the head of the Kaesong Industrial District Management Committee.

A Unification Ministry official said the government made a $13 million payment of wages and tax money in lieu of the South Korean businesses to the North to enable the return of the five government officials and two telecommunication employees from KT. The government intends to be repaid by companies working in Kaesong. The cash for the payment was transported to the industrial park in two armored vehicles.

“I hope the Kaesong Industrial Complex will be normalized as soon as possible and we will be able to work together once more,” Hong said. He added that South Korean business owners ensured that they left their Kaesong factories “secure.”

This came one week after Seoul announced it would withdraw all its workers from the nine-year-old joint-venture park, home to 123 South Korean factories. Kaesong was the last joint North-South business operation started in the days of the Sunshine Policy of engagement.

On Monday, 43 of the remaining 50 South Korean workers were allowed to return home.

But five South Korean government officials including Hong and two telecommunications employees from KT remained behind to resolve unpaid payment of wages, taxes and telecommunication fees upon North Korea’s demand. The North also demanded South Korean companies pay income taxes for 2012 and fees for having used the Kaesong Telecommunication Office to make phone calls between Seoul and Kaesong.

Earlier yesterday, after days of negotiation, the North and South came to an agreement regarding the payment of outstanding amounts to the North, enabling the return of the seven South Koreans, said a Unification Ministry official.

According to South Korea, the North demanded $7.2 million in wages for its 53,000 workers for March.

Other remaining issues such as a South Korean request for vehicles to enter the zone later to bring out raw materials will be negotiated later, said a government official.

On April 3, Pyongyang unilaterally blocked South Koreans from entering the joint industrial park. Pyongyang then withdrew its 53,000 workers from Kaesong on April 9 and blocked any incoming food and materials, which led to a gradual withdrawal of South Koreans from the complex.

The return of the officials marks the first time since the start of the complex that not a single South Korean national remains there.