Choo is back on track with his fifth home run

Choo is back on track with his fifth home run 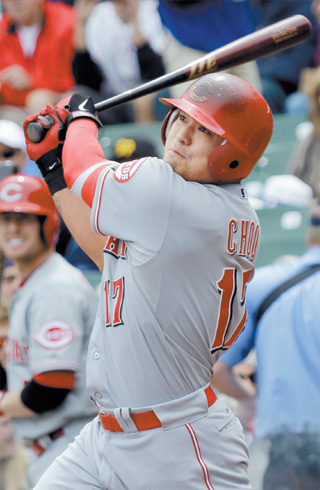 The Cincinnati Reds’ Choo Shin-soo hits a solo home run against the Chicago Cubs during the first inning of a game in Chicago on Saturday. The Reds won 6-4. [AP/NEWSIS]

Choo Shin-soo of the Cincinnati Reds had his fifth homer of the season against the Chicago Cubs on Saturday as the Korean slugger was recovering from a slump.

In his first at-bat at Wrigley Field in Chicago, the lead-off hitter smacked the first pitch of the game by Cubs starter Jeff Samardzija, sending it over the left-hand wall. It was Choo’s first homer since a solo home run against the Washington Nationals on April 27.

Choo scored a run in the third inning after reaching the base on a walk, and the Reds rallied from behind in the eighth to beat the Cubs 6-4.

Choo, who led the major leagues with .535 on-base percentage until April 24, had only three hits in 26 at-bats from seven games since April 25. But, he improved against the Cubs on Friday, going 2-for-3 and scoring two runs in the Reds’ 6-5 victory. After Saturday’s game, his batting average and on-base percentage improved to .330 and .467, respectively.

Choo said that he has tried to stay positive to regain his form.

“It was a tough road trip in the four games in Washington and three games in St. Louis. I only had a couple of hits,” Choo said after Saturday’s victory, according to the Reds’ Web site.

“Baseball is a long season, 162 games. A couple of times, it will happen. Good players on good teams [separate from] bad players on bad teams in how quickly they come out of slumps.

“I worried about it. I thought about it. I tried to think positive. I didn’t have many strikeouts. The good thing was to have contact.”

Samardzija pitched six effective innings for Chicago after Choo homered on the first pitch of the game, and James Russell got three outs before Carlos Marmol entered with a 4-2 lead. It was Marmol’s 453rd relief appearance with the Cubs, snapping a tie with Lee Smith for the franchise record.

He marked the occasion by walking Zack Cozart on four pitches, walking Joey Votto on a full count and hitting Brandon Phillips to load the bases with no outs. That was enough for manager Dale Sveum, who replaced Marmol with Hector Rondon. The crowd of 36,455 showered Marmol (2-2) with boos as he made his way to the dugout.

“Obviously, we know the guys that are out there pitching that have been doing it for a while,” Reds right fielder Jay Bruce said. “Marmol’s tough, but he’s certainly hit or miss, and we took what they gave us and it was enough.”

Bruce hit an RBI single and Todd Frazier followed with a sacrifice fly to right, tying it at 4. After Xavier Paul was walked intentionally, pinch-hitter Jack Hannahan walked to force home a run and Devin Mesoraco, another pinch hitter, sent another fly ball into right field to give the Reds a 6-4 lead.

“Nice team effort,” Frazier said. “Got nine guys up that inning and we manufactured runs. It wasn’t a big one there.”

Logan Ondrusek (2-0) worked the seventh, Jonathan Broxton pitched the eighth and Aroldis Chapman finished for his seventh save.