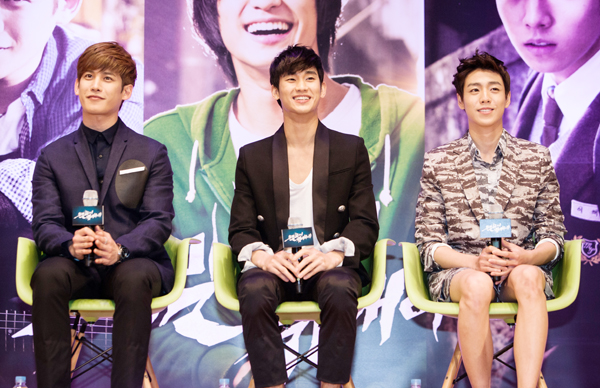 Park Ki-woong, Kim Soo-hyun and Lee Hyun-woo pose for the cameras at a fan and press event for their upcoming film “Secretly, Greatly.” Provided by Show Box

As the world watches Kim Soo-hyun’s next move, fans are counting down with bated breath for the opening of “Secretly, Greatly” in just over a month.

The plot about a group of North Korean spies living incognito in the South no doubt appeals as North-South tensions have been escalating of late.

But the creative story line aside, the feature boasts a lineup of additional heartthrobs: Park Ki-woong, 28, and Lee Hyun-woo, 20, guaranteeing enough eye candy for fans of all ages.

With the flower boy trio down pat, the movie will show to the nation and fans abroad whether Kim, the Hallyu actor of the moment, has what it takes to be a leading man.

This will be his first film lead, although he has won the hearts of K-drama fans with his roles in “Dream High” and “The Moon that Embraces the Sun” in the last two years. His role in last year’s hit film “The Thieves” was only a minor one, after all.

Aside from the Kim factor, the movie is being monitored closely as it is based on a popular Webtoon from 2010.

Ahead of the opening, Kim, Park and Lee, accompanied by the film’s director Jang Chul-soo and Webtoon writer Hun, took part in a fan meet last week to talk about the hyped-up production.

Jang, who has a plethora of awards as well an international following for “Bedevilled,” which was screened at Cannes in 2010, said that he could not think of anyone better suited for the lead.

“Because the Webtoon was such a hit, there was immense pressure, and we thought the only way we could live up to the expectations was with a great cast,” said Jang. 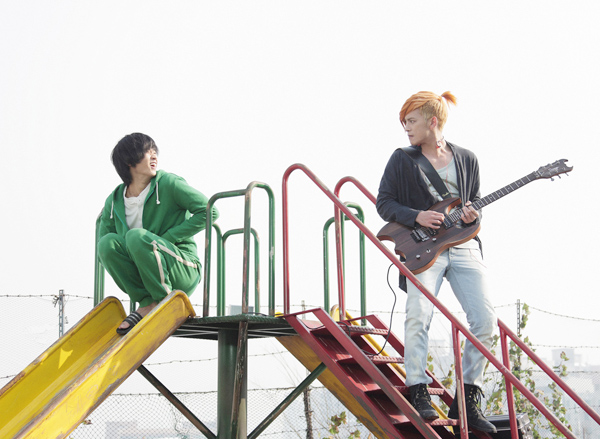 The film is adapted from a popular Webtoon.

“We had to find someone who could play the role of Won Ryu-han. It had to be someone bold, with talent as well as ambition, and really, there was only one actor who had all these characteristics,” Jang said.

Funnily enough, Hun, the mastermind behind the Webtoon, confessed that he was far from being starstruck when he heard that Kim would resurrect his dear protagonist on the big screen.

“I don’t have a television at home so I had no idea who Kim Soo-hyun was,” Hun said.

Kim, for his part, said he also had to work hard to perfect the significant role as the spy in disguise as the town idiot.

“Because my character is pretending to be stupid, I tried my best to be the kind of fool that town people of all ages would feel comfortable talking to,” said Kim. “The thing is, there is a fool inside everyone, and we all want to let it all out.”

Park, who plays the role of a spy in disguise as a rocker, said that despite the plot being centered on the Korean conflict, he hoped fans from both home and abroad would realize that it is foremost “about people and love.”

“It’s no secret that we are a divided country, but in the movie you see three North Koreans who become a part of a South Korean town, and I hope that people will be touched by the humanistic appeal,” said Park.

Last but not least, Lee, being the youngest of the three main characters, said that he was excited about taking on his first major role.

“Hae-jin is a very attractive character that I can learn a lot from. And through him, I’ve been able to have a go at a role unlike any I’ve taken on before,” he said.

Before the hour-long event drew to a close, Kim also answered a question that has been the minds of his most avid fans for some time: when he would like to get married.

Closer at hand though, Kim also promised that if the film exceeded 10 million views, the cast and director would dress up and stage a fan meet.

Eager to see the hits go up, Jang added that personally he had another idea: “If we get to that number, we’ll invite female fans, and the actors will kiss them somewhere on their faces.”