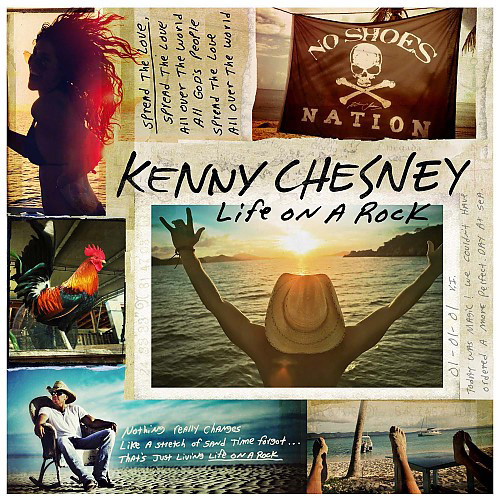 Kenny Chesney opens his new album, “Life on a Rock,” with the hit, “Pirate Flag,” a rowdy beach-bum anthem reminiscent of his many fun-in-the-sun party songs of the last dozen years.

While most of the rest of “Life on a Rock” references island life, instead of rocking out, the songs are about unplugging from the chaos of the daily grind and reflecting on quieter pleasures.

Writing four songs by himself, and co-writing four more, this is the East Tennessee singer’s most personal album since 2005’s “Be As You Are (Songs From A Blue Chair).” There are light moments, as in the duet with Willie Nelson on “Coconut Tree,” but the focus is on off-beat, real-life characters (“Lindy”) and on taking a moment to count one’s blessings (the title song).

It’s a bold move, considering that a new crop of country rockers are selling millions of albums modeled on Chesney’s pounding arena rock sound. But, to his credit, Chesney follows his muse and offers up an album that exposes his weathered soul. The result is as appealing as it is surprising.