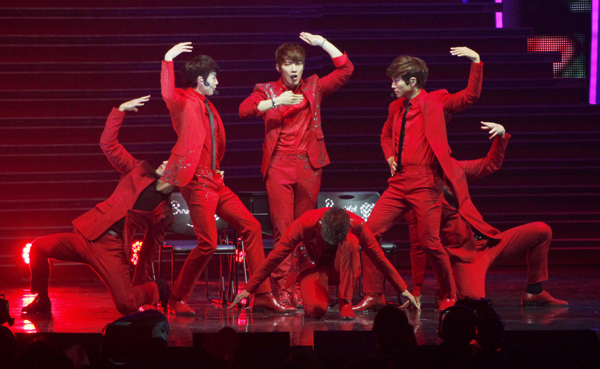 The third Korean album by 2PM “Grown” ousted the group’s own Japanese single “Give Me Love” from the top spot on the Tower Records prerelease chart Friday.

The six-member group revealed the music video for “Give Me Love” and performed the song during the Japanese concert “Legend of 2PM in Tokyo Dome” on April 20-21. The Japanese song will be released on May 29.

“Grown” will be released today in Korea online and in stores, according to the JYP Entertainment, which represents the group.

“‘Grown’ will not be officially launched in Japan, but will be imported from Korea,” JYP Entertainment said about its introduction to Japanese fans.

“We have realized how enthusiastically Japanese fans are responding to 2PM, not only to the Japan album, but also to the Korea album.”

Various versions of the “Give Me Love” hit currently sit at second, fifth and sixth on the Tower Records list, showing its continued popularity among fans in neighboring Japan.