Hyundai chief has no plans for new U.S. plant

Hyundai chief has no plans for new U.S. plant 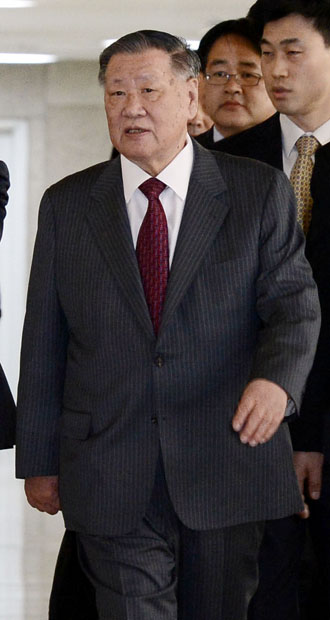 Amid persistent speculation that Hyundai Motor Group may add manufacturing facilities in the United States, its Chairman Chung Mong-koo told reporters yesterday that there are no concrete plans to build a plant there yet.

He said yes to a question on whether he would visit a Georgia plant belonging to Kia Motors during his U.S. trip but added “ I don’t know yet” when asked about plans to build an additional one.

As demand has surpassed supply in the U.S. market, experts have raised the possibility that the top automaker in Korea could expand its manufacturing capacity there.

The 75-year-old left Seoul yesterday as part of a business delegation that will accompany President Park Geun-hye on her summit with U.S. President Barack Obama.

The delegation is scheduled to have breakfast with President Park on Wednesday while attending business roundtable meetings hosted by the U.S. Chamber of Commerce in Washington.

But before joining President Park, Chung will first visit Hyundai Motor and Kia Motors’ U.S. headquarters and looking around the automakers’ plants in Alabama and Georgia.

Hyundai and Kia have been struggling in the United States this year. Their combined cumulative sales in the first four months of 2013 were 402,133 units, down 2.3 percent from a year ago, while other carmakers saw a 6.9 percent average on-year increase.

With the weakening Japanese yen and sluggish domestic production following weekend overtime issues with its labor union, industry insiders have speculated that Hyundai may be considering another plant abroad.

Chung said during the Federation of Korean Industries meeting last week that “the company can build more plants when it has opportunity.”