After ‘rough patches,’ alliance stronger than ever, says Feulner

After ‘rough patches,’ alliance stronger than ever, says Feulner 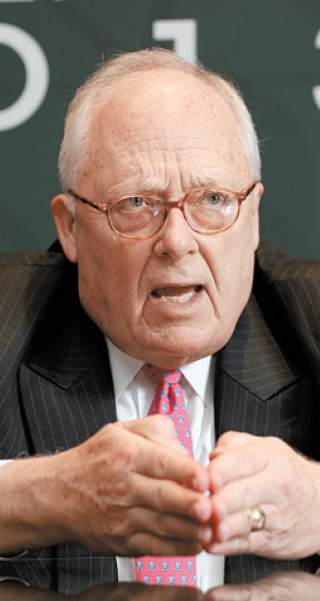 The Korea-U.S. alliance is stronger than ever as it approaches its 60th anniversary although it’s had its rough patches, said the former president of conservative U.S. think tank Heritage Foundation.

Ahead of President Park Geun-hye’s first summit with U.S. President Barack Obama, the JoongAng Sunday last week sat down with Edwin Feulner, 71, who co-founded and led the Washington-based Heritage Foundation for 36 years.

“The upcoming summit should not be a stage to discuss problems but rather one to celebrate 60 years of the Korea-U.S. alliance,” Feulner said.

Feulner, a former executive director of the Republican Study Committee and analyst at the Center for Strategic and International Studies, invited Park to his home in Virginia in March 2005 when she was a National Assembly representative. He calls Park “a woman I respect and a dear friend.” Feulner also attended Park’s inauguration in February.

Observing the Korea-U.S. alliance for the past 50 years from Washington, Feulner said there were times when bilateral relations became “endangered.”

In the 1970s, President Jimmy Carter proposed to withdraw all U.S. ground forces from the Korean Peninsula, a promise from his presidential campaign.

“Looking back, whenever there was effort to ease tension, it failed because of North Korea,” Feulner said, adding that the “method of negotiating with the irrationally behaving North Korea has to change.

“But even with dialogue our stance has to be firm,” Feulner said. He said what he fears most is “the fact that Sino-Japanese relations are shaky.”

He added it is important that Beijing help bridge ties between Pyongyang and Washington, Tokyo and Seoul.

“The one country that has influence over North Korea is China, but if it doesn’t put proper efforts to denuclearize Pyongyang, South Korea, Japan and Taiwan may arm themselves with nuclear weapons.”

“China has to think carefully,” he said, to avoid “the situation in which North Korea turns into an irresponsible rogue state because it has China’s tacit agreement.”

Once the Xi Jinping administration is properly settled in, he said, “China has to demand North Korea to become a responsible state.”

Talking about recent calls for South Korea to develop nuclear weapons, Feulner said, “The U.K. and France acquired nuclear weapons following World War II, before the establishment of the North Atlantic Treaty Organization. That makes Korea, which celebrates 60 years of alliance with the U.S., a different case from France and the U.K.

In regards to the recent extension of the Korea-U.S. bilateral civilian nuclear agreement by two years, Feulner said, “It is a relief.” Now that the nuclear negotiations have been pushed back, the two countries can focus more immediately on boosting missile defense cooperation, he said.

Chicago-born Feulner, a recipient of the Presidential Citizens Medal by former President Ronald Reagan in 1989, the second-highest civilian award in the U.S., has visited Korea over 125 times. He said, “I hope unification occurs while I am still alive.”

The Heritage Foundation is a research and educational institution co-founded in 1973 by Feulner. He served as its president from 1977 and stepped down last month.