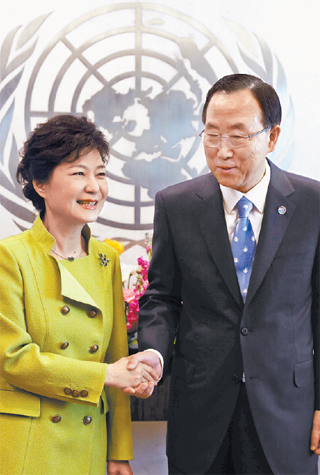 The Ministry of Trade, Industry and Energy hosted a ceremony Monday in New York, announcing that seven American enterprises have declared commitment to invest $380 million in Korea.

On Wednesday local time, Park and the high-profile business delegation accompanying her will have another opportunity to advertise the soundness of the Korean economy before a group of American business magnates at a luncheon to be hosted by the U.S. Chamber of Commerce.

One of the key aims of President Park’s trip to the United States is to advertise Korea’s economic stability despite escalated tensions caused by North Korea’s headline-grabbing war threats.

On Monday morning, Yoon Sang-jick, minister of trade, industry and energy, hosted an investment ceremony at the Lotos Club in New York City with top executives of seven U.S. companies including Boeing and Curtiss-Wright.

“Despite the increased uncertainty caused by the security crisis on the Korean Peninsula, foreign investors’ faith in the Korean economy remained solid,” Yoon said. “It is also significant that they are making additional investments in Korea.”

According to Yoon, Boeing will create an avionics maintenance, repair and overhaul, or MRO, center in Korea. The American aircraft builder will initially invest $20 million in the project in Yeongcheon, North Gyeongsang, and expand the facility later by committing another $100 million, a press release said.

“Boeing’s business with Korea was usually focused on selling airplanes,” Yoon said. “But this project will contribute to making Korea the firm’s maintenance hub in the Asia-Pacific region.”

Curtiss-Wright made a commitment to invest in a production facility for valves for nuclear reactors, Yoon also said. The $30 million investment, when realized, will contribute to Korea’s reactor components industry and improve the country’s nuclear energy safety through supplies of advanced components.

Almost Heroes LLC, an animation company, committed to investing $20 million in an animation production project in Korea, the minister added.

Other investments discussed at the ceremony included $120 million by an American firm in solar cell and module production and another $70 million investment in the tourist facilities in the Gangwon city of Pyeongchang, where the Winter Olympics will be held in 2018. The names of the companies were not disclosed, however, because of ongoing negotiations.

Although it remains to be seen if all seven investments will come through, Yoon said the ceremony reaffirmed investors’ interest in Korea and the government’s will to assist potential investors.

Another opportunity to advertise Korea’s economic prowess will come Wednesday when Park and her economic delegation attend a luncheon to be hosted by the U.S. Chamber of Commerce in Washington.

Park brought along the largest-ever business delegation on her first presidential trip abroad. The 52-member delegation includes not only leaders of Korea’s largest conglomerates and financial groups but also heads of small- and midsize enterprises.

On Wednesday, Park is scheduled to have a breakfast meeting with her business delegation. It will be her first meeting as president to discuss the country’s economic situation and her policies with business leaders.

Later in the day, a CEO roundtable and luncheon will be hosted by the U.S. Chamber of Commerce. Park’s senior economic officials, Korean businessmen and American tycoons will attend the event.

The events will be an opportunity for Park to reaffirm Korea’s stable economic fundamentals even with the North Korea risk, Ju Chul-ki, Park’s senior secretary for foreign affairs and national security, said Sunday.

The American businessmen attending the event include Paul Jacobs, CEO of Qualcomm and chairman of the U.S.-Korea Business Council, Dan Akerson, chairman of General Motors, and Marillyn Hewson, CEO of Lockheed Martin.

According to Ju, Moon Jin-kook, president of the Federation of Korean Trade Unions, will also attend the meeting to show Park’s strong commitment to include labor in Korea’s economic prosperity.

The significance of the business delegation was one of the first things that Park mentioned shortly after she left Seoul.

Aboard the presidential airplane, Park hosted a meeting with Trade Minister Yoon, Foreign Minister Yun Byung-se as well as her senior secretaries for foreign, economic and public affairs.

At the meeting, Park discussed the trip and particularly the Korean business delegation. Yoon commented that not only heads of conglomerates but also midsize enterprises joined the delegation this time, and Park replied that she hoped it would be a great business opportunity for them.

Yoon also said it was desirable for Korean companies to enter the Middle East market to grab postwar construction projects in Iraq and proposed to send the business delegation to the area.