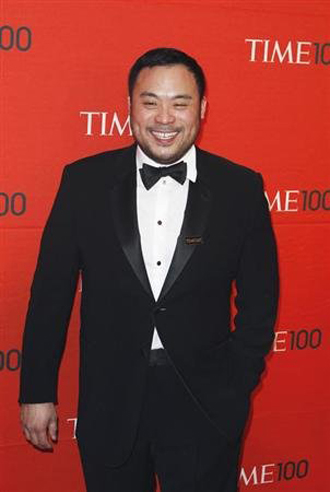 NEW YORK - David Chang, who has helped popularize kimchi and other Korean food in the United States, was jointly honored with Paul Kahan as the nation’s most outstanding chef by the James Beard Foundation on Monday.

Susan Ungaro, president of the James Beard Foundation, lauded Kahan as a “great chef who’s creative with a casual flair,” while Chang “has brought a modern approach to Asian cuisine that no one else has done before.”

It is only the third time in the 20-year-plus history of the awards that its premier prize went to more than one chef. The last time it happened was in 1998, when two European-born chefs, Wolfgang Puck and Jean-Georges Vongerichten, tied. Pioneering chefs Larry Forgione and Jean-Louis Palladin were co-winners in 1993.

Other past winners of the top award include Thomas Keller, Mario Batali and Tom Colicchio.

Chang’s edgy, in-your-face style - not to mention a deft hand with steamed pork buns - has spawned a global empire of media and restaurants, including New York’s Momofuku Ko and Ma Peche - some of the hottest, hard-to-get tables in the city.

“I grew up dreaming what it might be like to do this and how impossible it might be,’’ said Chang, who said he has idolized Kahan for years. “I’m really, truly honored. A tie could not have been better because I’m glad I’m not up here by myself.’’

Chang owes his career largely to an obsession with ramen noodles, which led him to Tokyo and eventually back to school for a culinary degree (his first had been in religion).

Kahan is at the forefront of Chicago’s increasingly robust restaurant scene. After leaving computer science, he spent years apprenticing to some of the city’s top talent, including Rick Bayless. He spun that experience into an award-winning restaurant group that includes Blackbird, Avec and The Publican, all of which reflect his own culinary obsession - sustainably sourced ingredients and close relationships with producers.

The James Beard awards honor those who follow in the footsteps of Beard, considered the dean of American cooking when he died in 1985. Monday’s ceremony honored chefs and restaurants; a similar event on Friday was held for book and other media awards.

Chang has won three previous Beard awards, including for best new restaurant for Momofuku Ko in 2009 and rising star chef in 2007. Kahan was named a regional best chef in 2004. Both men lost out for the same honor last year to Daniel Humm, the chef behind New York’s Eleven Madison Park.

He believes exceptional ingredients should be allowed to stand on their own. A signature dish is “vegetables on a fence,’’ baby vegetables simply prepared and presented speared on a row of upright prongs.

“I feel like the luckiest chef in America today,’’ Barber said. He jokingly credited his restaurant’s success in part to the difficulty of finding it on New York’s back streets. “They are so much hungrier than they would have been,’’ he said. “I have this feeling, this conviction that the food tastes better than it otherwise would.’’

The group’s Lifetime Achievement award went to chef and restaurateur Cecilia Chiang, who founded San Francisco’s Mandarin Restaurant and has been credited with introducing Mandarin cuisine to the United States.