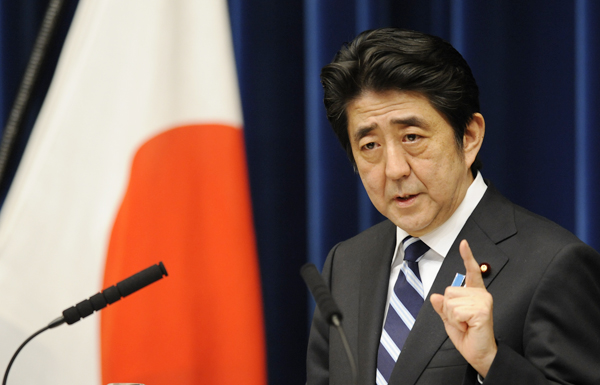 TOKYO - Despite Japan’s assurance earlier this week that it had no plans to revise its 1993 statement apologizing for Japan recruiting women as sex slaves, Prime Minister Shinzo Abe yesterday made more remarks that seem to deny Japan’s wartime aggression by quibbling about semantics.

“In the United Nations General Assembly [in 1974], a resolution was passed defining ‘aggression,’ but that was as a guide for the UN Security Council in cases of acts of aggression,” said Abe as he addressed the Diet’s House of Councillors yesterday. “The definition of aggression therefore is widely debated in the academic field and is not set in stone.”

He spoke in response to a question from a representative requesting Abe to elaborate on his remarks last month in the Diet regarding the “lack of definition” for the term aggression.

On April 23, Abe angered Seoul, Beijing and other Asian capitals when he told the House of Councillors that “the term ‘aggression’ was not defined internationally or academically,” in apparent denial of the so-called Murayama apology of 1995 in which Prime Minister Tomiichi Murayama expressed remorse for Japan’s colonial rule and acts of war aggression.

Nearly 150 lawmakers made a pilgrimage to the Yasukuni Shrine on that same day, following several ministers’ earlier visit to the shrine, which commemorates Japan’s war dead including Class A war criminals from World War II.

In the upper house of the Diet yesterday, the opposition Democratic Party of Japan’s Representative Masako Ogawa asked Abe during a budget committee meeting if his April remark didn’t go against the United Nations General Assembly Resolution 3314 of 1974 which provided a definition for aggression - “the use of armed force by a state against the sovereignty, territorial integrity or political independence of another state” - which Japan approved.

Abe made his “not set in stone” remark and went on to say the UN General Assembly’s definition could serve as “guidelines,” but that the “final decision is made in the Security Council” - and that no such decision has been made yet.

Apparently trying to calm down anger from other Asian nations, Cabinet Secretary Yoshihide Suga said yesterday that the Abe government has never considered revising past apologies. He said that Japan has “no intention of making this a diplomatic and political issue.”

After Abe was elected in December, he proposed a review of the 1993 statement by Chief Cabinet Secretary Yohei Kono apologizing for the damage caused by the Japanese government recruiting Asian women to serve as sex slaves for its military. On April 23, Abe said he wouldn’t repeat the 1995 statement by former Prime Minister Tomiichi Murayama apologizing for Japan’s brutal colonial rule of countries. And he promised a very different kind of statement for the 70th anniversary of the end of World War II in 2015.

On Tuesday, after hundreds of people rallied in front of the Diet in protest of Abe’s extreme right-wing policies, Minister of Foreign Affairs Fumio Kishida stated that Japan will not be back-pedaling on its stance on the so-called comfort women. “The Japanese government has accepted the facts of history in a spirit of humility, expressed once again our feelings of deep remorse and our heartfelt apology,” he said. Kishida said Abe shared that view in an apparent move to placate tensions with Asian neighbors.

But regarding compensation for women forced into sexual slavery, Abe said yesterday that the matter “has been completely and finally resolved” in the 1965 settlement between Japan and Korea. “If such an agreement has been made, each country should regard past problems as past problems, and walking a new path is the wise thing to do,” he said.