Would Ssangyong sit-in be legal at White House?

Would Ssangyong sit-in be legal at White House? 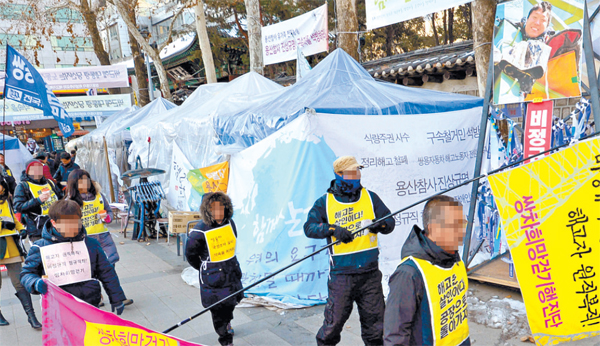 The tents used in protests by laid-off workers of Ssangyong Motor were removed by the local district office on April 4. The workers and their supporters say their protest outside Deoksu Palace in central Seoul is legal. [NEWSIS]

On May 1 near Seoul Plaza in central Seoul, Workers’ Day rallyists clashed with the police.

The rallyist tried to climb over a fence surrounding a flower bed that was created last month in front of Daehanmun, the main gate of Deoksu Palace, where a long-running sit-in by workers laid off by Ssangyong Motor took place.

The police who tussled with the more aggressive rally participants were forced to use tear gas to control the situation. In the disturbance, two police officers were injured and a protester was arrested for assaulting police officers.

The issue was the sit-in by the laid-off workers.

The workers started a sit-in in April 2012 in front of Daehanmun to protest their laying off by the country’s smallest automaker in 2009.

They erected tents on the pavement outside the gate and right by the crosswalk that connects the Seoul Plaza and the palace and occupied the site 24/7.

In March, a 52-year-old serial arsonist set fire to the tents early one morning, telling police later he was “cleaning up the dirty city.” The fire consumed two of the tents and charred 27 rafters of the palace, which cost 30 to 40 million won ($35,748) to be replaced.

The district office decided enough was enough and declaring the sit-in an illegal occupation of public space, cracked down on April 4.

Around 6 a.m. that morning, about 50 officials of the Jung District Office approached three tents in which three protesters were sleeping and removed them as 280 riot police stood by.

The sneak raid took only 10 minutes to complete. After removing the tents and other materials, the Jung District officials created a flowerbed so the workers couldn’t rebuild their tents.

Since the clearing of the sit-in, the workers are back on the sidewalk with desks and chairs in front of the flowerbed, and disturbances like the one on May 1 are frequent.

They claim their demonstrations are legal. But the law clearly states it’s illegal to set up a tent on a public road.

“There is an elderly woman who has been staging a rally for decades after setting up a tent near the White House,” says a supporter of the Ssangyong workers. “The White House lets the woman continue her rally.”

The JoongAng Ilbo decided to test this assertion. On April 21, it sent a reporter in Washington to meet the elderly woman camped out near the White House.

Her name is Concepcion Picciotto, 67, and she was born in Spain and immigrated to the U.S. when she was 18 years old.

After her first marriage with an Italian entrepreneur failed, she met Thomas Williams, who had staged a protest near the White House starting on June 3, 1981. Picciotto joined him and continued the protest after Williams died in 2009.

She is a busy woman. Many tourists come to see her tent and ask questions about her protest.

Her answers are mostly the same: “I oppose nuclear weapons,” she says. “I fight for peace.” When the JoongAng Ilbo reporter told her he was from Korea, she showed a rock with the Taegeuk pattern painted on it with the word pyeongwha, or peace.

Picciotto didn’t look healthy. Her back was bent, and she said that her shoulders are in pain due to a car accident she was involved in last year. She has only one upper and lower tooth.

The JoongAng Ilbo carefully examined her tent. It is about 2 meters (6.6 feet) high and 2 meters wide. People walked by it without showing signs of inconvenience.

She originally began her protest on the sidewalk outside the White House fence, but the National Park Service demanded she move across Pennsylvania Avenue to Lafayette Square.

“She was authorized by the Supreme Court to keep the tent after having a series of legal battles,” an activist who helps Picciotto told the JoongAng Ilbo. But there are some strict rules she must follow.

In accordance with the rules of the public park, she can stage a rally, but she can’t camp in the park, meaning she can’t sleep at the site. Nor can she leave her tent and equipment behind when she departs.

When a new president is inaugurated every four years, she has to vacate her spot for visitors to the inauguration.

In contrast, the sit-in held by Ssangyong protesters outside Deoksu Palace shows its camping gear to passersby every day. Before the tent was set on fire by the arsonist, the protesters used to sleep inside every night, and they used two large LPG canisters, two small generators and two stoves. In addition, several large signboards and banners are used in the area.

“If they follow the rules,” said Allen Kerry, a police officer at Lafayette Square, “anyone is free to demonstrate any opinion.”