100 mark a bummer for exporters

100 mark a bummer for exporters 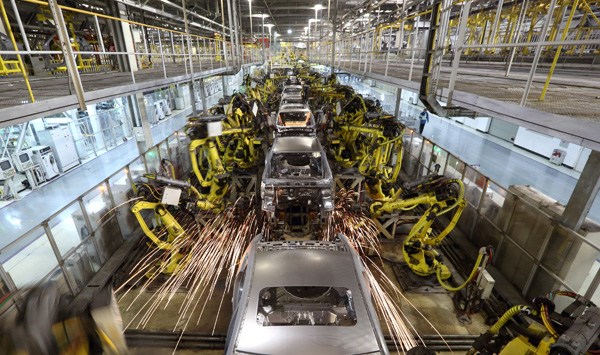 Sparks fly on the welding line at a Beijing Hyundai Motor plant as the Korean automaker tries to boost overseas production in response to the weak yen. Hyundai saw a sharp decline in net profit due to currency fluctuations in the first quarter. [BLOOMBERG]

Korean exporters were disappointed but not shocked as the Japanese yen broke the 100 mark against the greenback in Thursday trading in the United States.

“The yen breaking the 100 mark isn’t really surprising news, but the problem is that it is damaging to business sentiment,” said Ju Won, a senior research at Hyundai Research Institute. “People think the situation will get worse.”

Most Korean export companies have already reported that their net profits dropped due to the currency situation. Hyundai Motor, the nation’s largest automaker, said net profits in the first quarter dropped nearly 15 percent compared to a year ago.

And what seems to bother these companies is that operating profit is also declining as their products become less price competitive in overseas markets. 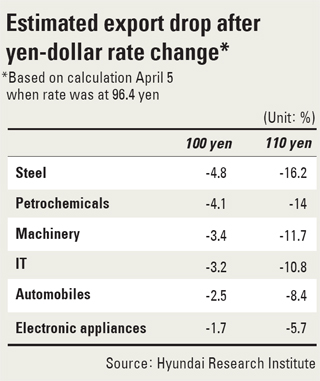 In the case of Hyundai, sales actually grew in the first quarter, but operating profit ratio dropped 1.7 percentage points year-on-year to 8.7 percent. In contrast, Toyota reported this week that its operating profit for the fiscal year ended March 31 reached 1.3 trillion yen ($12.8 billion), nearly four times more than the previous year. The world’s largest automaker is aiming for operating profit of 1.8 trillion yen for the current fiscal year, a 36.3 percent increase.

“It is true that the weakening yen is hurting us, but we have been preparing our best measures to stay afloat,” said a Hyundai spokesman. “We have been running this system of monitoring the currency status around the clock since late last year.”

According to data from the Ministry of Trade, Industry & Energy, the value of Korean exports in the first four months of 2013 was $181.7 billion, an increase of just 0.5 percent from last year.

Exports to emerging markets like Brazil (minus 20 percent), Turkey (minus 8.1 percent), Indonesia (minus 7.6 percent) and India (minus 2.9 percent) were no exception.

The impact of the yen breaching the 100 mark differs by industry and company, experts said. Those that supply products to Japanese companies may get a boost, for example.

But in general, negative sentiment in Korea is expected to be widespread. According to data from the Hyundai Research Institute last month, compared to the yen trading at 96.4 to the greenback, Korea’s overall earnings from exports drop 3.4 percent when the yen reaches 100 and 11.4 percent if it hits 110.

By industry, the think tank speculated the steel industry will suffer the most, followed by the petrochemical and machinery sectors. However, IT and the home appliance industries should not fare as badly since companies like Samsung Electronics and LG Electronics have technology and products that are superior to Japanese companies. “Since we have constantly enlarged the portion of overseas production to a considerable level, the risk from a lower yen isn’t too big at the moment,” said an LG Electronics spokesman.

“For the long term, the companies need to reinforce competitiveness in technology while enhancing brand value and diversifying export markets,” the HRI said in its report.