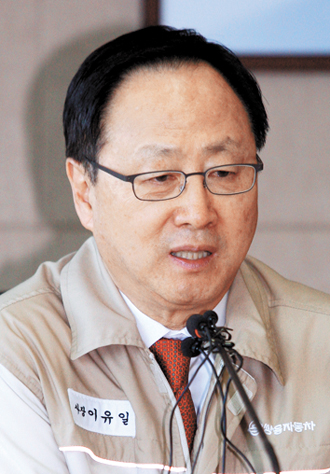 PYEONGTAEK, Gyeonggi - Ssangyong Motor President and CEO Lee Yoo-il believes that starting nocturnal shifts with reinstated workers is “one step forward toward normalization of the business.”

Lee, who previously worked with Hyundai Motor and Hyundai Development Company, said the automakers will be in black if it can sell 170,000 vehicles a year. Ssangyong’s Pyeongtaek plant in Gyeonggi has an annual capacity of 240,000 units, but the production volume in recent years was cut nearly in half.

“Starting night shifts is not a result that happened through pressure from outside, but a result of our employees’ effort through day and night,” Lee said yesterday at the company’s Pyeongtaek plant.

Lee said it is unclear when voluntarily retired workers could return to the automaker again.

The 69-year-old Lee, who joined then financially troubled automaker in 2009, said the company would need more workers when its X100 new generation sports utility vehicle rolls out in 2015. The union expects that more than 90,000 X100s can be produced a year, although Lee declined to confirm that figure.“The X100 would certainly affect this company,” he said. “In February, Mahindra’s board approved investment of 80 billion won [$71.9 million]and this will be all used to develop the X100.”

According to Lee, Mahindra, which acquired a majority stake of the nation’s smallest automaker for $463.6 million in 2010, wants to “go forever” with Ssangyong. He said the India-based company is investing not only financial resources but also in education programs - such as sending executives to Harvard Business School - to help Ssangyong step up as a global company. “Mahindra is not a company that wants to siphon off our resources,” Lee said. “By communicating with Mahindra, we are trying to foster talent that can contribute to our company’s globalization.”

Lee said dropping sales of the Chairman, a luxury sedan, has been giving some headaches, but that doesn’t mean company will abandon the flagship sedan.

In terms of worries of nocturnal shifts with reinstated workers, Lee said the initial quality won’t be a problem, because not only returned workers but also existing employees from the first, second and third assembly lines would be working with them to keep the production quality.