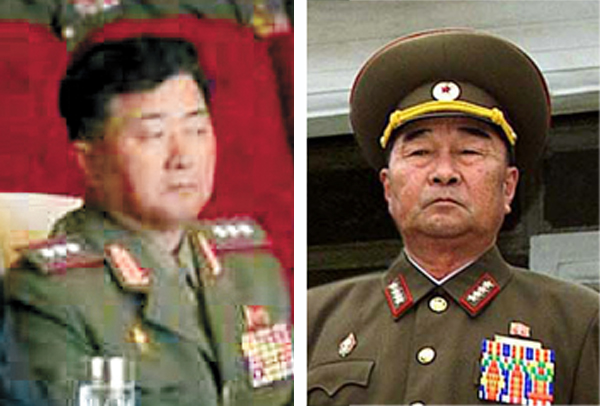 Kim, a four-star general, was former commander of the 4th Corps who choreographed the sinking of Southern warship Cheonan and the deadly shelling of Yeonpyeong Island in 2010.

The North’s official Korean Central News Agency and Rodong Sinmun reported yesterday that leader Kim Jong-un attended a musical performance by public security guards along with his wife Ri Sol-ju and other high-ranking officials, including the newly minted defense minister who was identified as Jang Jong-nam.

The report focused on the leader’s visit to the performance without specifying when Jang was appointed minister or giving his profile.

The appointment appeared to be a recent one, based on state media reports. When the KCNA reported Kim Jong-un’s visit to Unhasu Orchestra on May 4, it said the defense minister was Kim Kyok-sik. In that report, Jang was sitting next to Jang Song-thaek, powerful uncle and guardian of Kim Jong-un.

Kim Kyok-sik, who is reportedly in his 70s, was named defense minister in October. Sources in Seoul said the new minister, Jang Jong-nam, is in his 50s and is a member of a junior circle in the North Korean People’s Army.

In December, North Korea held a military rally in front of the Kumsusan Palace of the Sun in Pyongyang where a series of North Korean commanders swore their loyalty for the leader. The state media revealed their names and positions at the time.

At that time, Jang was introduced as a two-star general and the commander of the 1st Corps of the North Korean military, a front-line unit in charge of border security near Kangwon Province of the North.

In his oath, Jang said he would “wait for the order from the supreme commander [Kim Jong-un] for the ultimate attack” on the enemy.

However, the Rodong Sinmun, the official newspaper of the ruling Workers’ Party, released yesterday a photo of Jang in military uniform with three stars.

When Jang was appointed, the specifics of his career were not verified. South Korea’s Defense Ministry spokesman Kim Min-seok said the North Korean military appears to be getting younger.

“Our military is cautiously monitoring the current situation in the North Korean military, including the replacement of key figures,” Kim said at a daily briefing yesterday. “We will have to figure out whether or not all of the hard-line members have been replaced, but the generation [of the military men] is becoming younger.”

With the appointment of the new defense minister, all of the men in North Korea’s key military posts are younger than 70, considered young for North Korean politics.

Ri Yong-ho, former chief of the General Staff of the Army, was abruptly dismissed in July. Ri, reportedly 71, was replaced with Hyon Yong-chol, an obscure 64-year-old general who was promoted to four stars in September 2010 along with Kim Jong-un.

Choe Ryong-hae, the 63-year-old chief of the General Political Bureau, replaced Kim Jong-gak, 72. Kim was one of the seven power elite members who accompanied the hearse of late leader Kim Jong-il during his funeral in December 2011.