Some defectors are kids on their own

Some defectors are kids on their own 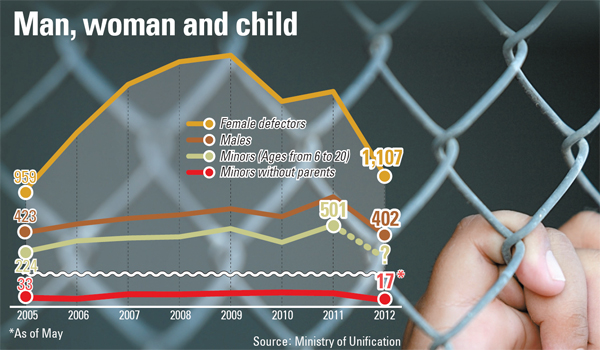 “You are leaving tonight, so prepare.”

With those words from her father in April 2011, an-18-year-old North Korean woman surnamed Choi discovered her life was about to change radically in just a few hours.

Choi had told her father, a construction worker in the city of Hoeryong, North Hamgyong Province, that she wanted to defect to South Korea. Choi had been forced to leave school after elementary school to help her mother sell Chinese-made garments in a street market. Her dream was to become a doctor, impossible in North Korea considering her family’s low social status.

But Choi realized her dream was possible in South Korea.

News about the outside world penetrated the nearby border with China. Choi’s aunt lived across the border in the Chinese city of Yanji. Even in Hoeryong, they were surrounded by goods unofficially imported from South Korea sold in the street markets.

“At times I saw goods manufactured at the Kaesong Industrial Complex,” Choi recalls. “And in the mid-2000s, crossing the Tumen River was very common among families in Hoeryong. Whole families went missing overnight: They went to the South.”

But Choi’s father hadn’t mentioned her comment in a year, so he surprised her that night in April 2011. “I did not expect the day of my escape would come like that,” Choi, now 20, said in an interview with the Korea JoongAng Daily.

And she was even more surprised at the next piece of news: She was defecting from North Korea alone.

Choi’s parents and her younger sister were staying behind, partly because of elderly grandparents who would otherwise be left alone but also because they led a relatively stable and comfortable life.

Choi’s father arranged her escape with his sister who lived in China. A few hours later, two ethnic Korean-Chinese brokers knocked on the family’s door. Choi wasn’t allowed to bring anything, even pictures of her family which would put them at risk if she got caught by either North Korean or Chinese border guards.

Choi said farewell to her family in total darkness.

“I just kept sobbing,” she recalls. “I knew those might be the last remaining moments I would ever have with them.
“
But my parents said, ‘We will meet again. Don’t worry about us here. Go to the South and study hard,’?” Choi recalls with tears streaming down her face. “They said: ‘Don’t ever regret your decision.’

“I crossed the frigid Tumen River arm-in-arm with the brokers on each side. About 10 minutes later, I came to the Chinese side without being noticed by security guards.”

Following the devastating floods and famines in North Korea in the mid-1990s ? along with the collapse of the communist Soviet Union and Pyongyang’s deepening isolation from the rest of the world ? the trickle of defectors from North Korea going to South Korea turned into a steadily growing stream.

The early defectors were mostly men. That changed in the first decade of the 21st century when women defectors started outstripping men. North Korean women have an easier time fleeing their country, especially through marriages with Chinese men. Some of the marriages are real, some are shams. There are plentiful jobs for North Korean women in the Chinese cities along the North Korean border.

That has created a large population of females, some of whom decide to go to South Korea.

But all along there have been children defectors too, some coming with their families ? and some making the arduous trip all alone. The number of minor defectors shot up from 2002, peaking at 501 defectors aged 6 to 19 in 2011 ? a dramatic jump from 12 in 1998. The number of kids coming by themselves without family peaked at 69 in 2010.

As of May 2012, a total of 145 minor defectors without parents reside in South Korea.

In 2012, when the young and untested leader Kim Jong-un took control in Pyongyang following the death of his father Kim Jong-il, he cracked down on defections, seeing them as an embarrassment to the North.

Interestingly, although the Unification Ministry gives statistics for 2012 and 2013 for the total number of defectors, it refuses to say how many minors made it to the South. It thinks Pyongyang might be able to use that number to crack down on young people attempting to defect.

After crossing the Tumen River, the brokers escorted Choi (which is a pseudonym used to protect her family in North Korea) to her aunt’s residence in Yanji city in northeastern Jilin Province. She spent the next seven months awaiting the right moment to go to South Korea.

In November 2011, Choi landed at Incheon International Airport and was accepted as a defector from North Korea. She asked the Korea JoongAng Daily not to disclose how she got from China to South Korea to avoid causing harm to people who helped her or making it more difficult for defectors using the same route in the future.

After a requisite three-month stay at Hanawon, the state-run settlement support center for defectors, Choi enrolled in the Heavenly Dream School, an education center for defectors in pursuit of higher learning in Songpa District, southern Seoul. Choi lives with three other young defectors in a three-room apartment provided by the school. A “guardian,” a teacher from the school, lives with the four young women.

“The government provides group housing for minors under age 20 [after the discharge from Hanawon],” said a Unification Ministry official. “The government runs about 10 group homes nationwide for such minors. Some go on to live with their relatives in the South as well.”

“My group home is my family here,” Choi says. “Our guardian says she will wear hanbok [the traditional Korean dress] at my wedding.”

The freedom Choi enjoys most in South Korea is the freedom to study. She says her only worries are pursuing her academic goals. Choi passed middle and high school equivalency exams over the past year and is now studying to get into a university college of medicine.

“I know how hard South Korean teenagers study day and night to go to good universities, not to mention medical schools,” she says. “I will keep doing my best to reach the point where I can gain admission.”

At times, however, Choi can’t help but think of the family she left behind. “Since I said good-bye to my parents, I haven’t talked to them,” she says. “My aunt told me my father was put in detention for a few days and questioned by local authorities about my whereabouts. He was released later. But that’s all she has told me.”

But when asked if she’s ever regretted coming to the South, Choi says: “Never!”