Big retailers are looking at a pretty miserable 2013

Big retailers are looking at a pretty miserable 2013 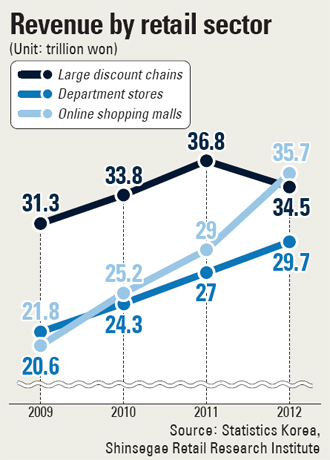 Retail stocks were mixed yesterday due to the weak consumer spending and the government’s forcing of big stores to close a few days a month to give a break to smaller stores.

But as the brick-and-mortar stores suffer, retail sites online and home shopping networks are doing great.

According to the Korea Stock Exchange yesterday, shares of E-Mart, the nation’s largest discount store chain closed 2.4 percent lower to close at 196,500 won ($176) and Lotte Shopping fell 1.07 percent to 371,000 won from the previous day.

According to sources, the Ministry of Trade, Industry and Energy, formerly called the Ministry of Knowledge Economy, delivered a revised distribution industry development act to local governments nationwide, which prompted speculation that regulations on large retailers will be strengthened in the second half of the year.

Under the revised law, large discount stores and super super markets (SSMs) will not be able to operate between midnight and 10 a.m. and they will be forced to close their stores two days a month.

Currently, large retail stores can’t operate from midnight to 8 a.m. and have to shut their doors or limit their operating hours once or twice a month.

With the amendment, large discount stores nationwide will suffer in the second half.

“Large discount store chains are estimated to have seen something like a 10 percent on-year sales decline in April, and whether they will recover in the second half is uncertain,” said a research fellow at KB Securities.

However, when the government’s economic stimulus plan takes effect in the second half with a supplementary budget and interest rate cuts, overall consumption could improve, industry sources said.

“In the case of home shopping businesses, the improvement in gross profit with high-margin products and slowing hikes in the home shopping transmission commissions will drive solid earnings,” said an industry source.

Due to the lingering economic slowdown, consumers are also turning to relatively inexpensive online shopping malls.

In terms of sales performances, the offline stores and online shopping malls are clearly divided.

The operating profit of Shinsegae between January and March this year declined 7.7 percent compared to the same period last year to 46.6 billion won.

Hyundai Department Stores saw a 13.6 percent decline in operating profit for the first quarter of this year, and its net income fell 6.2 percent.