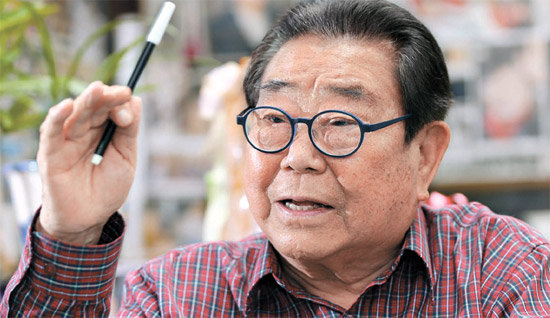 Song Hae, 86, has been hosting “The Singing Contest” on KBS for 23 years. By Kim Sang-seon

At 86, Song Hae is a television host, singer, comedian, actor and musician. But he is famous for hosting KBS’ long-loved show, “The Singing Contest,” for 23 years. The show isn’t a brutal competition like other trendy broadcast survival shows. The 33-year-old show travels nationwide every Sunday and allows locals to enjoy it whether they take part or just watch.

Recently, the legendary contest has gained the spotlight for being the subject of a movie of the same title, revolving around local contestants. Song also made a cameo appearance.

A JoongAng Ilbo reporter met with Song on May 8 at his Society of Evergreen office in Nagwon-dong, central Seoul. He said he drank until late the night before as his concert, “Big Show,” was abruptly cancelled due to escalating tension between the South and North. Song said, “It upsets me. But I could not help it as safety should come first. North Korean defectors, coming for my show, can be exposed to the terror threat.”

Besides movies, Song is as busy as other celebrities. Last year, he shot a broadcast advertisement for the Industrial Bank of Korea, which earned him the “Best Advertising Model of Korea” award by the Federation of Advertising Associations and a contract renewal for another year. Also, he is slated to appear in a drama and to set up a foundation aimed at raising funds for students’ education and creating jobs for 50- and 60-somethings.

“I should have started much earlier. I was too busy, just moving forward for myself. I think I’m not the only one, but my generation could not afford to care about others as it was going through the colonial rule of Japan [1910-45] and the Korean War [1950-53]. I think it is never too late to help people in need,” Song said.

Next month, Song will donate 100 million won ($89,600) he earned from promoting a dietary health supplement to his foundation. The developer, JW Pharmaceutical, will also donate some of its profits to the charity.

“Actually, my family and friends were opposed to this idea because they thought I could get in trouble for endorsing the health supplement in case it doesn’t work for people. But it sure worked on me. It may work to varying degrees, depending on the person.” Song said.

The product was developed and commercialized for Song by his personal doctor after he became ill because of colorectal cancer, diabetes and high blood pressure.

After having surgery, Song is full of energy. He sees his doctor twice a week and whenever he feels like something is wrong. And he commutes by subway and sometimes walks on his tiptoes to stay healthy.

“Walking this way enhances blood circulation as tightened calves send blood to the heart,” Song said. “But most of all, it is best to avoid getting stressed. Everybody knows mental stress leads to physical illness.”

Last year, rumors surfaced that he was in critical condition when he skipped hosting “The Singing Contest” on Sept. 22. “I felt bad at the time, so I called my doctor and he urged me to come back to Seoul right away. It was the first time I failed to appear on the show ever since I started hosting it, but I felt the need to take care of my health, so I can keep working on it.”

After the interview, he and the reporter had a meal with soju (Korean alcohol). “I always defeat stress by chilling out with friends over a bottle. I used to cut out alcohol for three months last year. But now I will always take care of my health so I can enjoy drinking as long as I can,” he said.