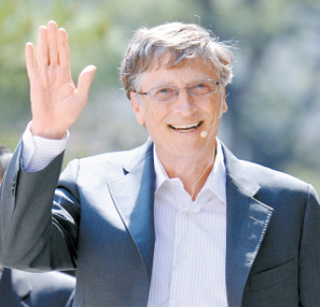 “Should I quit school if I want to start my own business?” Lee Du-hee, 30, a doctoral student in computer science at Seoul National University (SNU) asked Bill Gates, co-founder of Microsoft, during a lecture Gates gave to about 300 SNU students on April 21.

Bill Gates replied that he quit Harvard, but he doesn’t recommend him doing the same thing.

The attendees burst out laughing, with some of them whispering “why would he ask such an awkward question to an international celebrity?”

But Gates didn’t consider it an awkward question.

Immediately after the lecture, he told SNU that he wanted to speak with Lee and they later spoke about the issue via mobile phone.

“I wasn’t able to meet him personally because he is a very busy man,” Lee said in a phone interview with the JoongAng Ilbo.

“But I explained why I asked that question when he called me.”

When the JoongAng Ilbo asked about the details of the conversation, he answered carefully, saying, “Please understand that I can’t give you details.”

Judging by his history, it is possible to guess that Gates and Lee discussed the difficulties of establishing a small enterprise for a student.

He also posted a message on the SNU students’ Internet forum and explained why he asked the question.

“I established an enterprise with 10 students in my department in 2011, but I was scolded by many professors,” the message read.

“Some of the students quit school or quit the company. I strongly felt that it is very hard to start a business by putting one’s major to work.

“In advanced countries like the U.S., students in universities actively establish their own enterprises in the Information Technology (IT) field.

“In my opinion, we can’t compete in the IT industry if students who spent most of their college years writing research papers can’t make it when they try to establish an enterprise after graduation.”

He also pointed out a contradiction.

The school discusses the “creative economy,” a concept that merges science and IT and touts turning innovation into economic value that was initiated by the Park Geun-hye administration as an economic goal and invited Gates to lecture, all the while fostering an environment that forces students to leave the school if they create a business.

Lee has created a lecture evaluation Web site (snuev.com) that allows students to evaluate every lecture and share information. Most SNU students currently use the Web site when they register for a class.

When he created “Klassmate,” a social community Web site for university students, in 2011, the Kakao Company, which runs the country’s most popular mobile messaging service Kakao Talk, invested about 2 billion won ($1.79 million) in the business.

He also warned that SNU’s Internet security is very weak, but as the school didn’t react to his warning, he hacked the school’s central computer center where they manage the school server. The yearbook photo of actress Kim Tae-hee, who is an alumnus of SNU, was leaked on the Internet.

Lee will quit school after wrapping up this semester. He says he can’t study and run a company at the same time.

There is no separate division that supports students’ setting up their own businesses as well.

“I decided to leave the school because they said they can’t offer anything that can support my business activities,” Lee said. “He [Gates] reacted to my concern, but the university didn’t.”

“We agree that Lee is a good student,” a spokesman of SNU told the JoongAng Ilbo.

“But changing the university’s regulations or making additional support programs for student entrepreneurs is a totally different issue. Practically speaking, he must choose between studying and running a company.”