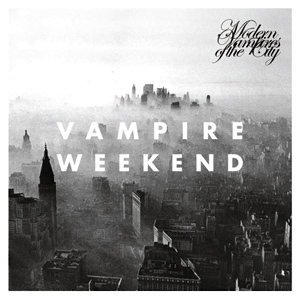 After releasing two bouncy albums of reggae-flavored pop laced with African rhythms, Vampire Weekend turns down the tempo and ups the indie-rock vibe on its third effort.

“Modern Vampires of the City,” which the band characterizes as the culmination of a trilogy, puts singer-songwriters Ezra Koenig and Rostam Batmanglij’s guitars and harmonies front and center.

The New York quartet maintains the layered arrangements it established as its signature on its self-titled 2008 debut and 2010’s “Contra,” with organs and strings in the musical mix.

But the vocals are more in focus here, with a choir adding haunting depth to the two closing tracks, “Hudson” and “Young Lion.”

These 12 new songs are more coffee house than college party, but that’s not a bad thing.

There are enough upbeat entries - including the cleverly titled rockabilly single “Diane Young” - to satisfy expectations, and the slower pace allows Vampire Weekend to show what else it can do.

Modern Vampires of the City