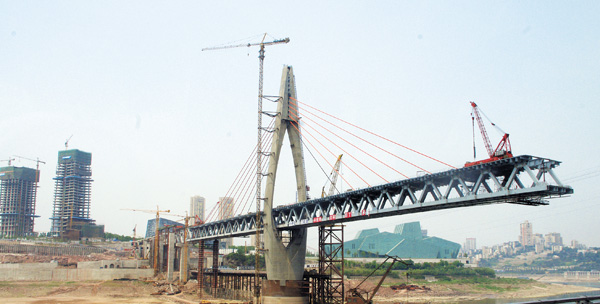 A structure that will connect Dongshui bridge and LiangJiang bridge in Chongqing, China, is under construction. There are 10 or so bridge projects underway in the rapidly developing Chongqing. By Park Jin-seok

As the western region of China is moving to the forefront of new economic development, Korean companies are gearing up to forge their way into major cities in western China such as Chongqing and Xi’an.

In fact changes are now visible in Chongqing, which is built on uneven land with winding roads.

Infrastructure to flatten the hills and straighten the roads as well as new high rises can be witnessed on every corner.

There are already 20 or so major Korean companies that have settled in these regions. 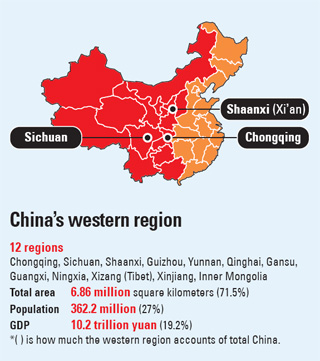 Among the top 10 areas in China that saw the fastest growth last year, seven came from the western region. Chongqing ranked third on the list as its regional economy expanded 13.6 percent. Xi’an and Sichuan came in fifth and seventh.

The economic growth of western China was much higher than that of cities that were once symbols of China’s growth on the east coast.

The three western regions expanded 125 and 151 percent compared to five years ago. However, during the same period Jiangsu grew 107 percent while Zheijiang increased 84 percent and Guangdong up 79 percent.

With the increasing income, the potential for spending is higher than in other regions.

The local government’s support of foreign companies is also an attractive feature.

The Xi’an government was quick to clear out the area three months after Samsung Electronics announced building a factory there.

In the case of the Chongqing government, it has set up an exclusive industrial complex for Korean companies. Those that set up offices and plants will have their corporate income tax reduced, local government tax exempted for three years and a 10-50 percent subsidy where they will build their business.

The opening of the two longest railways for commercial trains worldwide is another positive contributor.

China in 2011 opened a railroad that travels from Chongqing to Xi’an, Urumqi, Russia, Poland and Duisburg, Germany. The train runs from 15-18 days. In April last year a railway connecting Chengdu to Poland was opened. The train travels for 12-14 days from one end to another.

On a recent visit by the JoongAng Ilbo to Chongqing, a large tire manufacturing plant of the Korean tire maker Hankook Tire stood on a vast open plain. The plant was situated a one-hour drive from the center of the city. The plant was already equipped with the latest automated equipment that not only produces tires but also conducts inspections. 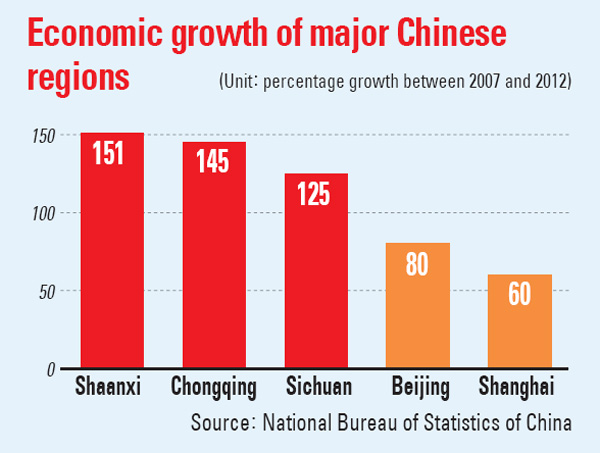 Even the tiniest flaw could be detected, according to the company. Also, each stage of the process will be recorded on a barcode on the product. This will allow the tire manufacturer to efficiently track down any problems or flaws.

“We will ship products that are 100-percent verified,” said Chang Maeng-geun, the 54 year-old head manager of the factory.

Hankook Tire is a leading tire seller in China, with a 13-percent market share of replacement tires.

It already has two factories that are operating in China. One is in Jiangsu, eastern China, near Shanghai while another is located at Zhejiang, also in eastern China, south of Shanghai.

The Korean tire company has built its third plant deep inside China because it anticipates sharp growth potential in the region.

“We believed that it was important to take the lead in the western region that has been growing at an alarming rate,” said Chang.

The tire company hopes to manufacture 11.5 million tires by 2015.

Other companies are also vying to grab the lead of the western region whose growth potential at this point seems unlimited.

The Korean steelmaker’s Posco-CCPC already distributes 110,000 tons of steel from its plant in Chongqing to the Chinese Changan Automotive Group, which also has its headquarters in Chongqing.

There are a lot of Korean cars in Chongqing.

Old models such as the Sonata EF to the latest models like Kia Motors’ K5 as well as Hyundai Motor’s SUVs such as the Tucson and Sportage are widely popular in the western city.

“Hyundai and Kia Motors cars are popular here because they are affordable while the quality is good,” said Park Il-nam, a 28-year-old Korean-Chinese.

Noticing growing popularity in the western cities of China, Hyundai is already building a production plant for commercial vehicles in Sichuan through a joint venture subsidiary.

The Korean automaker hopes to produce 700,000 units of commercial vehicles, ranging from bus to trucks.

It is also considering a plan to build its fourth passenger vehicle manufacturing plant in the western region.

The first Korean company to launch into Sichuan was Kumho Asiana Group. In 1995, the Korean conglomerate entered the express bus business and now has three joint ventures in the region.

Woori Bank in January 2012 became the first Korean bank to set up its office in Chengdu, southwest China.

The Korean retail giant Lotte Department Store is opening its Chengdu branch in August this year.

In 2011, SK Group opened up its western office in 2011 and plans to enhance its strategy with its office in Beijing.

Like Chongqing, Xi’an is also becoming a center of interest among Korean companies.

Hype has been shifting to Xi’an since Samsung Electronics announced its plans of building a NAND flash member production plant there.

The Korean company plans to invest $30 billion, which is the single-largest investment by a foreign chipmaker in China.

LG International, SK Telecom and other Korean companies are looking at possibilities of venturing into Xi’an.

“Companies grow on the back of development,” Chang said.