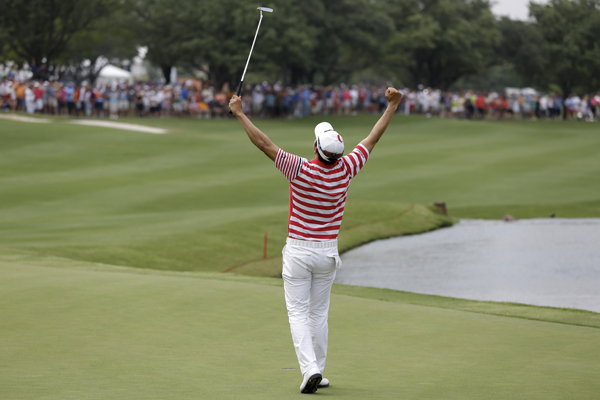 Bae Sang-moon held off three-time PGA winner Keegan Bradley of the U.S. by two strokes to win the Byron Nelson Championship on Sunday, becoming the third Korean to win a PGA title.

It was the first PGA title for the second-year player, who has competed in 43 PGA Tour events, including four events that he played as a non-Tour member.

Bae, 26, joined Choi Kyoung-ju and Yang Yong-eun as a PGA winner from Korea. The former, better known as K.J. Choi, is an eight-time winner, while the latter, or Y.E. Yang, won twice. Including Korean-Americans, Bae is the fifth player of Korean heritage to win the PGA Tour title. Kevin Na and John Huh are one-time winners.

Bae added the PGA title to his already stellar career in Korea and Japan. He was the money leader on the KPGA in 2008 and 2009 and won the Japan Golf Tour money title in 2011.

He first picked up a golf club at the age of 8 and turned professional in 2005. He won seven titles in Korea and three titles in Japan.

“It’s something I’ve always dreamed of, winning on the PGA Tour,” Bae said. “It was surreal to have Ms. [Peggy] Nelson there and with all the history .?.?. I was in awe, actually, so almost I didn’t know how to react. “

Bae finished at 13-under 267 with a closing one-under 69 on a day with wind gusting to almost 40 miles per hour at times, similar to conditions two years ago when Bradley got his first PGA Tour win at TPC Four Seasons. Bradley shot 72 this time.

Four birdies in a five-hole stretch on the front nine gave Bae a four-stroke advantage in the final group. But he made a double bogey at No. 9 and a bogey at the next hole.

After some nice par saves, Bradley finally got even with a birdie at the 15th hole, a 17-footer that had just enough to get into the cup. But he missed a short birdie putt at the next hole to fall behind for good.

“When my iron play came back in the latter part of the round, I had confidence,” Bae said. “On that shot on 17, I knew it was short, and the wind pushed it over to the right, and I was happy and relieved that it turned out OK.”

Bradley was trying to become the Nelson’s first wire-to-wire winner since Tom Watson in 1980. Bradley set the course record with an opening 60, even with two bogeys.

“I’m pretty disappointed but Moon played very well,” Bradley said. “I just didn’t play great today, but I hung in there. I chipped away. .?.?. When I made that putt on 15, I was pretty confident that I was going to win.”

Charl Schwartzel, the 2011 Masters champ, shot a 68 to finish third at 10 under. Justin Bolli shot a bogey-free 65 for the best round of the day and matched his career-best finish of fourth. A stroke further back at 272 were Morgan Hoffmann (66), Martin Kaymer (68) and Scott Piercy (72).

Bae won $1.2 million, nearly matching his PGA Tour career earnings of $1.6 million in his 42 previous starts. He tied for second last year in the Transitions Championship after getting into a four-man playoff.

Bradley’s birdie at 15 was the only one he made all day. It gave him a share of the lead when Bae missed a par putt there from just inside 6 feet.

But after Bae sank a 5-foot birdie at the par-5 16th hole, Bradley had a shorter putt on the same line - it horseshoed around the hole and didn’t fall. He then hit his tee shot at the 171-yard 17th over the green.

“I hit that right down my line, right perfect,” Bradley said. “I just hit it too good. I ripped it through the wind.”

That made it irrelevant that he finally had a par at No. 18, the hole he bogeyed the first three rounds. Especially when Bae’s final drive went into the middle of the fairway.

Players wore red ribbons during the final round in memory of Ken Venturi, the 1964 U.S. Open champion and longtime CBS golf analyst who died Friday.

With the gusty winds and dried-out greens, the scoring average was 71.8 on Sunday. That was two strokes higher than Thursday’s first round, after 1.5 inches of rain. Players were able to lift, clean and place their balls the first two days.

“Feels a little like the British Open without rain,” Kaymer said about the conditions Sunday.

At No. 14, Bradley drove into the left rough between some trees and missed the green before chipping to 5 feet to save par. On the par 3 just before that, his tee shot settled behind the green, but he hit from there to 8 feet and made that putt as well.

Bae was 16 under and four strokes ahead after three consecutive birdies, on the fifth through seventh holes.