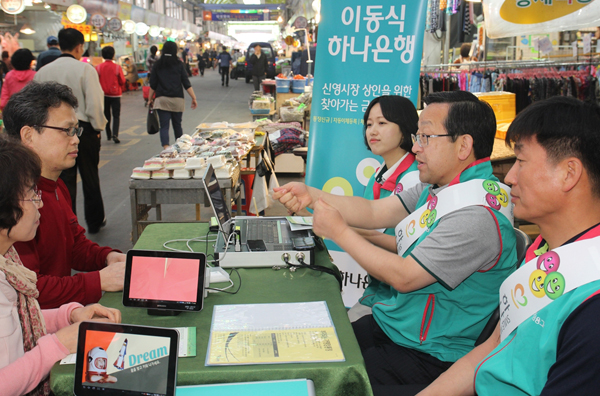 Kim Jong-jun, Hana Bank president, second from right, consults a merchant while visiting a traditional market in Yangcheon District, southwestern Seoul, yesterday. The bank is looking for new revenue sources by offering financial products customized to needs of their customers. Provided by the bank

This includes exempting commission payments for customers when they use ATMs or on wire transfers and also loans with specially lowered interest rates. It’s also offering deposit products with higher interest returns. The special services will be offered until the end of this year.

Additionally, since it’s not easy for merchants at traditional markets to physically visit banks during the day, Hana Bank will run temporary mobile bank branches for them to do banking and even open new accounts.

“We will expand our trade with those in the middle and lower income class while designing measures especially targeted to the various low-income customers,” said the bank’s president Kim Jong-jun. “Furthermore we plan on stepping up our customized services for merchants and low-income customers by opening up our special consulting offices in regional traditional markets.”

Bank president Kim, along with 60 or so Hana Bank employees including the head of the bank’s labor union Kim Chang-geun, visited a traditional market in Yangcheon District, southwestern Seoul, yesterday where they consulted with merchants on their financial problems.

KEB became the first Korean bank to open an office in Istanbul earlier this month. The bank has the largest overseas network among Korean commercial banks with 53 offices and branches in 23 countries.

However, the last time KEB opened a branch was in Ostrava, Czech Republic, five years ago as the U.S. private equity fund Lone Star, which was the majority shareholder of the bank at the time, was preoccupied in selling its shares.

The bank was able to return to overseas expansion after Hana Financial Group purchased the majority shares from Lone Star last year.

When announcing the opening of the Istanbul branch earlier this month, the bank noted the increasing business opportunities thanks to the free trade agreement signed between Korea and Turkey last year.

Currently there are 60 or so major Korean companies operating in Turkey including Hyundai Motor, which has an automotive production plant there.

KEB is planning to open additional offices in Indonesia, the Philippines, Japan, China and Chennai, India, by the end of this year.

Some banks are extending their business hours. Some branches of KB Kookmin Bank are operating from 2 p.m. to 9 p.m. Usually banks open at 9 a.m. and closes at 4 p.m. Standard Chartered Korea is opening some of its branches near office districts at 7 a.m. and closing them at 7 p.m.

It is targeting office workers who get off work at 6 p.m.

A Woori Financial Group research report recently showed that due to the lowering of the benchmark rate earlier this month by the central bank, the net profit made from interest by banks is expected to shrink.