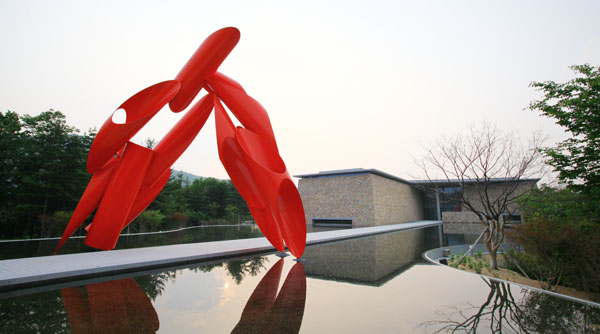 This water garden is on the grounds of Hansol Museum, designed by star architect Tadao Ando. The museum opened on a mountain slope in Gangwon last week. Provided by the museum

A museum ambitiously designed not only to show paintings and sculptures but also to make plants, water and even light of celestial bodies into a giant piece of art opened on a mountain slope in Gangwon on Thursday.

Hansol Museum, designed by star Japanese architect Tadao Ando, occupies 71,172 square meters (17.5 acres) and is roughly divided into six parts. It takes nearly two hours to see all six parts including the flower garden with 800,000 carnations and 380 birches, the water garden, the museum rooms and the stone garden, which was inspired by ancient Silla tombs. The museum itself is filled with Buddhist scrolls from the Goryeo period and paintings and sculptures by beloved Korean modern artists from the collection of the Hansol business group.

The last part and highlight of the museum is a structure dedicated to American artist James Turrell, who uses light and space for his work. Visitors to the hall can fall into meditation while viewing the sky through oval and square windows.

Admission is 25,000 won for adults, including access to James Turrell Hall. The museum is open from 10:30 a.m. to 6 p.m. Tuesday to Sunday, and is located in Oak Valley Resort, Wonju, Gangwon.