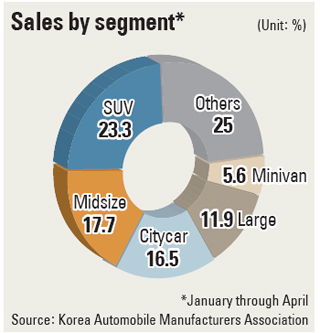 Midsize sedans have long been regarded as the model that most Koreans go for, but it seems the trend is changing as their sales have plunged to the lowest since the 2000s.

According to data from the Korea Automobile Manufacturers Association released this week, a total of 63,804 midsize cars were sold in the first four months of this year. The figure accounts for only 17.7 percent of total vehicle sales, the lowest in the last decade.

Sales of midsize vehicles, models such as the Hyundai Sonata, Kia K5 and Renault Samsung SM5, accounted for around 20 percent and were the largest segment in total vehicle sales between 2006 and 2011.

However, this is the first time that it has fallen under 20 percent. In fact, it plunged four percentage points lower than a year ago, when midsize car sales accounted for 21.7 percent of total sales.

In contrast, sales of small cars, including models like the Kia Morning or GM Korea Spark, are cruising thanks to people’s increased emphasis on fuel economy. The segment accounted for 16.5 percent of the domestic auto market after 59,444 units were sold.

However, the most improved auto segment in Korea was sport utility vehicles, as the group’s January-April sales marked 83,895 units to take up 23.3 percent of the market share. The SUV sales figure for the first four months of 2013 was a 30.5 percent year-on-year increase.

In addition, the popularity of outdoor activities, such as camping and sports, has made more people inclined to buy SUVs. The market shares of SUVs only accounted for 5.8 percent in 1996, but now it is above the 20 percent level.

“In the past, there weren’t enough SUV models that people could select, but now there are more than 10 local SUV models out there,” an official from Kia Motors said. “People’s lifestyles are also changing.”

Minivan sales were also soaring after having a 25.8 percent on-year increase to sell 20,116 units. It made up 5.6 percent of the market share.

Other experts suggested that the decline in sales of midsize sedans is an indicator of a struggling middle class in Korea.

Industry observers said that the local auto market could be going through polarization - with one pole being small cars and another large or imported cars.