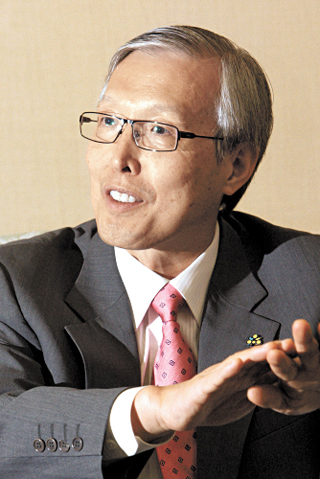 Korean ambassador to Japan Shin Kak-soo, one of the envoys to four major countries - the other three are the United States, China and Russia - to be replaced by the Park Geun-hye administration, wraps up his two-year post at the end of the month. He said Seoul needs a two-track policy when dealing with Tokyo.

During a period of heightened tensions between Seoul and Tokyo over historical and territorial disputes, Korea’s grievances with Japan regarding the so-called “comfort women,” or Asian women forced into sexual slavery by the Japanese military, is one of the most pressing issues Shin faced over a tumultuous two years.

“I regret most not being able to resolve the issue of comfort women,” said Shin, 58, who sat for an exclusive interview with the Korea JoongAng Daily last week. “That was something I wanted to tackle.”

Shin, who was posted to Tokyo in June 2011, immediately had to deal with the aftermath of the March 11 Tohoku earthquake and tsunami that devastated Japan’s coastal region, former President Lee Myung-bak’s unprecedented trip to the disputed Dokdo islets in the East Sea last August and the Shinzo Abe government’s right-wing approach to historical issues.

Q. There seems to be no end to the Abe government’s rightist drive. Why is that so?

A. In the Japanese political sphere, the balance of power between conservative and progressive influence has completely collapsed. As Japanese people feel anxious about the future, they are seeking strong leadership and Abenomics [pursued by Prime Minister Abe and his cabinet to kick-start the economy through ultra-loose monetary policy and fiscal stimuli] fits into this, so no matter how matter how much [the government] distorts history, its support rate surpasses 50 percent.

But not all Japanese people are like that. Criticizing Japan just as a whole can rather encourage the conservatives and right-wingers. When dealing with North Korea, the North Korean government and the people are differentiated. So shouldn’t there be a two-track approach to our relationship with Japan?

Isn’t Japanese politicians’ distortion of history rather extreme, though?

Japan in the process of modernization had the mentality of wanting to escape Asia and become Westernized, a mentality that still remains today. Because they were the only [Asian country] included in the civilized world, they have a tendency to look down on other Asian countries. An example of such a figure is Deputy Prime Minister Taro Aso.

Last August, former President Lee visited Dokdo. Did the clash between him and Prime Minister Yoshihiko Noda regarding comfort women during the Korea-Japan summit in Kyoto in December 2011 have a direct effect on this visit?

President Lee thought that so long as Japan was sincere, the comfort women issue could be resolved. But the Noda government conversely approached us because of legal matters and then requested that the monument of a girl in front of the Japanese Embassy in Seoul [the bronze Peace Monument of a young girl symbolizing comfort women] be demolished. Following that, accumulated events such as [Foreign Minister Koichiro] Genba’s speech on Dokdo and aides of the prime minister attending Takeshima Day [celebrated in Shimane Prefecture on Feb. 22] may have prompted the president to visit Dokdo.

What is your greatest regret as you leave your post?

The comfort women issue. I wanted to meet with Prime Minister Abe and say: ‘Resolving the issue of comfort women will be strategically beneficial to Japan, as well. Furthermore, through doing so, Japan will earn ethical legitimacy in Asia and demonstrate leadership, and be able to keep China in check.’ I even had been arranging a channel to [meet with him]. It’s too bad.

Miscommunication between Korea and Japan has been blamed on a lack of exchange between politicians of both countries.

Though the era where diplomacy was done through politicians’ pipelines has passed, there definitely is a role for politicians in diplomacy.

What is something we can learn from Japan?

Over two years, I traveled to all 47 prefectures. I was surprised at how they are divided into six to seven regions that each is self-sufficient in economy, education and culture. Each rural area has a top university and a global-scale art museum. If we want to foster rural areas, we need to research on how to establish those three areas.

What do we have to do for a more desirable relationship between Korea and Japan?

We, too, have thoughts of wanting to beat up Japan. We now have to overcome that a bit. And we need to be respected by Japan for Seoul-Tokyo relations to become normalized.