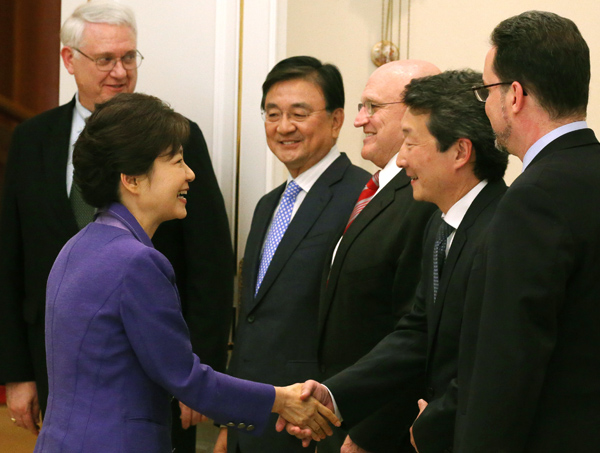 John Hamre, president and CEO of the Center for Strategic and International Studies, and Richard Armitage, trustee of the think tank as well as Victor Cha and Michael Green, professors at Georgetown University, visited the Blue House yesterday to meet with Park.

The American scholars were in Korea to attend the annual JoongAng Ilbo-CSIS forum.

“I am delighted to meet the scholars here as they always offer me helpful advice whenever we meet,” Park said at the meeting, asking them to work more actively to support smooth communication between Korea and the United States.

“I understand that this year’s forum is the third of its kind,” Park said. “I was told that the theme is ‘Kim Jong-un’s gamble and the crisis on the Korean Peninsula.’?”

“Kim has continued his risk-taking by escalating tensions on the peninsula,” she said. “And now he started another new gamble by seeking to develop the North’s economy while holding on to the nuclear arms development at the same time. I believe he can never succeed with this attempt.”

Park’s message toward the North was a reiteration of her position stressed during her recent trip to the United States earlier this month. During her summit with U.S. President Barack Obama and speech before a joint session of U.S. Congress, Park issued the same message to urge the North to end its nuclear program.

Park’s meeting with the high-profile dignitaries and North Korea experts came amidst the latest developments in the security climate surrounding the peninsula.

North Korea staged its latest provocations by firing short-range projectiles for three days in a row, while sending a special envoy to China, its long-time ally, earlier this week.

The discussion also took place only days after Park’s summit with Obama, where the two leaders discussed North Korea as one of the most important topics.

It also took place as she is scheduled to visit China later next month to meet with the new leadership there, including President Xi Jinping.

The delegation from the Center for Strategic and International Studies also met with Foreign Minister Yun Byung-se yesterday afternoon and exchanged their opinions on the North Korea issue.