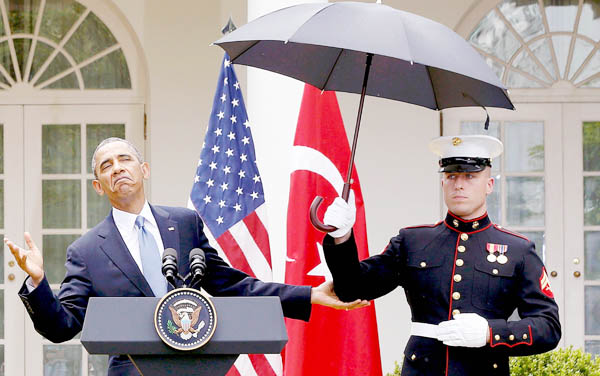 In the last month, there has been a lot of talk about whether American presidents face a second-term curse. It’s not clear that such a thing exists, but any second-term president is likely to have to deal with some real or apparent scandals. The reason isn’t arrogance, distraction or hubris. It’s a matter of arithmetic.

Whether a president will face an alleged or actual scandal depends on two variables. The first is whether something inappropriate, or at least apparently so, has happened either at his direction or on his watch. The second is whether someone has both the incentive and the ability to bring the allegedly inappropriate action to the attention of the public.

With respect to the first variable, a great deal depends on how long a president has been in office. As time passes, the incumbent becomes more likely than his predecessor to be held responsible for bad outcomes. Even more important, the sheer number of executive-branch decisions increases substantially over time. With every month, it becomes more likely that at least one of those decisions will turn out to be incorrect, inappropriate or worse.

If the president encourages or tolerates misconduct, the likelihood of scandals is high by definition. It will only grow over time.

The same is true even if the president is entirely honorable. Because the executive branch is exceptionally large, no president, however vigilant, can possibly control everything that happens there. Many thousands of federal officials, working in dozens of different agencies, are in a position to make important decisions, some of which may turn out to be wrong, inappropriate or worse.

True, an honorable and diligent president can significantly reduce the risk of misconduct. But after a period of four years, a bad or troubling decision is almost inevitable, given the sheer number of choices that will have been made. The real question is whether a troubling decision will turn into an apparent or actual scandal.

Which brings us to the second variable. Having been defeated twice, an opposing party will be angry and frustrated. It will seek to undermine the incumbent president however it can. Investigating real or apparent scandals can be an excellent way to weaken him. A losing party may see an alleged scandal, or an apparently reasonable claim for an investigation, as a political winner.

If the House and the Senate are both in the hands of the president’s party, the threshold for a serious investigation is obviously far higher than if either is controlled by the opposing party.

The media matters, as well. A honeymoon period is far more likely in the president’s first term than in the second. And if the media are well-disposed toward him, they are far less likely to investigate and publicize apparently troubling decisions than if journalists are skeptical about him. At the same time, the media are less likely to focus on scandals if they are preoccupied with other matters (such as an economic crisis, a war or other high-profile issues).

In an impressive study, Brendan Nyhan of Dartmouth College demonstrates the importance of the opposing party and of media incentives. Focusing on the period from 1977 to 2008, Nyhan finds an unmistakable increase in scandals in the second term.

Strikingly, he also shows that when the president is held in especially low regard by the opposing party, media attention is far more likely to be given to scandals, real or apparent.

Nyhan demonstrates how significant events (such as the Sept. 11 attacks and the Iraq War in 2003) claim the nation’s attention and tend to deprive real or apparent scandals of oxygen. Some big news events may also draw the media and the public to the president’s side, further reducing the incentive to focus on other matters.

None of this should suggest that we haven’t seen genuine scandals in recent history. But real ones can be ignored, and made-up ones can get a lot of public attention. While in office, President John F. Kennedy had an unusually colorful private life. It never turned into a problem because no one was willing to discuss it publicly (even though Kennedy had plenty of enemies). Some alleged or actual executive branch offenses wouldn’t have gotten much attention in the absence of intense hostility, on the part of some, to the incumbent president.

Political predictions are hazardous, but here’s a safe one: However wonderful his character, and whatever his political party, any second-term president will have to deal with a real or apparent scandal (or two, or three). The reason? Arithmetic.

* The author is the Robert Walmsley university professor at Harvard Law School and a Bloomberg View columnist.